The Salvation Army is asking us “White Folk” to pony up and be abused apparently. This has to be a first. Insult your donors. Let’s ask “why then should members of an organization built by the Christian faith to actually assist people of all races in need, be repentant of behavior they never perpetuated?”

This of course will put more outlets that allow the Red Kettles in more of a bind as whether to permit the bell ringers. Part of ushering the season was to hear and see the Salvation Army out on the streets, a sign that the holidays were upon us. Chipping in a few bucks was part of the holiday ritual. Newsweek does a good post on the subject: 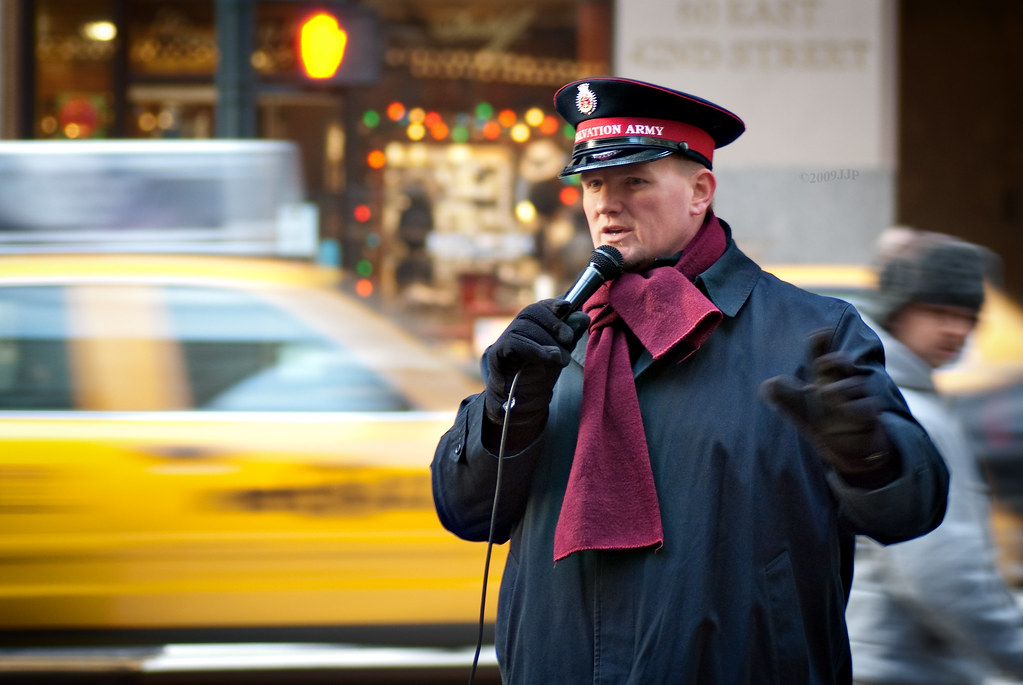 “Speaker for Salvation Army” by Singing With Light is licensed under CC BY-NC-ND 2.0

As The Salvation Army launches its Red Kettle Campaign this holiday season, some of its long-time donors are withdrawing their support from the 156-year old charitable organization citing its newly embraced “woke” ideology as the reason.

Of great concern to loyal supporters and faithful Salvationists is the initiative dubbed “Let’s Talk About Racism.” In a nutshell, its curriculum outlines the Christian church’s alleged racial collusion and provides action steps to analyze and combat racism through an “anti-racist” lens while incorporating Critical Race Theory.

Originally founded in London in 1865 by one-time Methodist preacher William Booth and his wife Catherine, TSA is both a Christian church and an international charitable organization. Organized in an “army” structure with officers, soldiers and volunteers, collectively they are referred to as Salvationists who are called to serve both the physical and spiritual needs of the impoverished as their Christian faith dictates.

“Repentance solely for the fact that you’re white, we don’t think that’s very productive,” Xu told Newsweek, who also noted that 60 percent of those served by The Salvation Army are from ethnic minority communities. That’s a statistic he told Newsweek he discovered by talking to Commissioner and TSA National Commander Kenneth G. Hodder.

“Here’s the thing with the SA that’s so crazy—these people spend their entire lives serving the poor,” said Xu. “There is absolutely no reason to even suggest or insinuate repentance for their supposed complicity in racism.”

A sad conclusion to another holiday ritual. They have done so much wonderful work. Our rural community, back in the day, was supported by the Salvation Army and helped so many that were distressed.

For the best in conservative news push the button. Welcome readers from Whatfinger News.