Cell phones will be tested for emergency takeover by the government as needed.This latest effort by the government in the innocuous notice released by the FCC yesterday. Of course it’s first for those who opt in for alerts. But we were warned what could happen back in 2011 when the first takeover of the air waves occurred.  For the first time in 2011 the government integrated control over local and state emergency broadcasting.  First they came for the radio,TV, cable and satellite. Then they come for our phones.  One has to ask why the military was involved. From the earlier post:

…he (Colonel Dietz) also asks whether it would make more sense to focus on mass messages to cell phones, given how people rely on them for communications. “Perhaps mobile phone ‘takeover’ technology would be in the SOCOM procurement pipeline down the road,” he writes.

WASHINGTON – FEMA, in coordination with the Federal Communications Commission, will conduct a nationwide test of the Emergency Alert System (EAS) and Wireless Emergency Alerts (WEA) this summer.

The national test will consist of two portions, testing WEA and EAS capabilities. Both tests will begin at 2:20 p.m. ET on Wednesday, Aug. 11 2021.

The Wireless Emergency Alert portion of the test will be directed only to consumer cell phones where the subscriber has opted-in to receive test messages. This will be the second nationwide WEA test, but the first nationwide WEA test on a consumer opt-in basis. The test message will display in either English or in Spanish, depending on the language settings of the wireless handset.

The Emergency Alert System portion of the test will be sent to radios and televisions. This will be the sixth nationwide EAS test.

The Department of Homeland Security and the Federal Communications Commission held the first nationwide test of the Emergency Alert System. The test occurred at 2 p.m. ET and was carried on all broadcast television, radio stations and cable and satellite television systems in the U.S. and U.S. territories. Wednesday, November 9, 2011.

Only the President has the authority to activate EAS at the national level, and he has delegated that authority to the Director of FEMA.  The test was conducted jointly by the Department of Homeland Security (DHS) through  FEMA, the Federal Communications Commission (FCC), and the National Oceanic and Atmospheric Administration’s (NOAA) National Weather Service (NWS).

In essence, the authority to seize control of all television and civilian communication has been asserted by the executive branch and handed to a government agency.

Many of us have been predicting that this is one of the moves the Government would prepare to do in order that they would be successful under the “right” circumstances. While this “test” will be for 3 minutes, there is nothing about the Executive Order process that limits the amount of time in the future.

On that day, federal authorities were to shut off all television and radio communications simultaneously at 2:00PM EST to complete the first ever test of the national Emergency Alert. Right in the heart of the day. This is no tin foil hat theory anymore.

If you want to take over a nation, then first take over its airwaves. Broadcast your messages and interdict the enemy’s ability to broadcast theirs. When the U.S. attacked Iraq in 1991, or NATO bombed Serbia in 1999, among the first targets destroyed were TV and radio stations. When there is a military coup in Africa, the first buildings the rebels usually grab are the radio and TV studios.

The Department of Homeland Security and the Federal Communications Commission held the first nationwide test of the Emergency Alert System. The test occured at 2 p.m. ET and was carried on all broadcast television, radio stations and cable and satellite television systems in the U.S. and U.S. territories. Wednesday, November 9, 2011.

Here is a question? Are we going to buy this bad boy from China?

Prior to initiating the FCT, USSOCOM wishes to identify all firms (both foreign
and domestic) which could provide a non-developmental light-weight,
multi-frequency, simultaneous over-broadcast system that has demonstrated a Technology Readiness Level of 8 or higher.

So it is illuminating that the United States Special Operations Command (USSOCOM), the organization that oversees America’s elite special forces, is quietly searching for equipment that will effectively give it control over every FM and AM radio station in an area. The short, innocuous-sounding announcement on the Federal Business Opportunities site states that SOCOM seeks vendors to provide “a radio broadcast system capable of searching for and acquiring every AM and FM radio station in a specific area and then broadcasting a message(s) in the target area on all acquired AM and FM radio station frequencies.” SOCOM wants equipment that is both lightweight and sophisticated enough to detect and broadcast over multiple frequencies simultaneously.

This is what the Pentagon now calls Military Information Support Operations, or MISO. This is a far less sinister name for what the rest of us call Psychological Operations, or Psyops.

Some might wonder whether this technology can be used inside the United States. The answer is yes. “The requirements outlined for this technology are specific to conduct operations overseas,” Cohen says. “However, in some instances and when directed, the MISO forces and equipment can be used during Civil Authority Information Support operations.  During these events, MISO equipment simply is a platform that is used to support organizations such as FEMA to disseminate information to the public regarding safety, and so on.”

Lawrence Dietz, a retired U.S. Army Reserve Colonel who participated in Psyops for 13 years and writes a Psyops blog, suggests that a mass broadcast capability would be very useful during a Katrina-like natural disaster that can transmit emergency information when civilian transmitters have been knocked out. However, he also asks whether it would make more sense to focus on mass messages to cell phones, given how people rely on them for communications. “Perhaps mobile phone ‘takeover’ technology would be in the SOCOM procurement pipeline down the road,” he writes.

And what became of Lawrence Dietz

Dietz, is General Counsel of TAL Global where Tal Global’s international business has given him extensive experience in international contracts. Prior to joining TAL Global Dietz served in senior roles at Symantec Corporation to include Director of Market Intelligence and Global Public Sector Evangelist. He retired as a Colonel in the U.S. Army Reserve. His degrees include BS in BA, MBA, JD, LLM in European Law. He is the author of the authoritative Blog on Psychological Operations (PSYOP), http://psyopregiment.blogspot.com. He is a member of the Bar of the US Supreme Court, California and the District of Columbia. 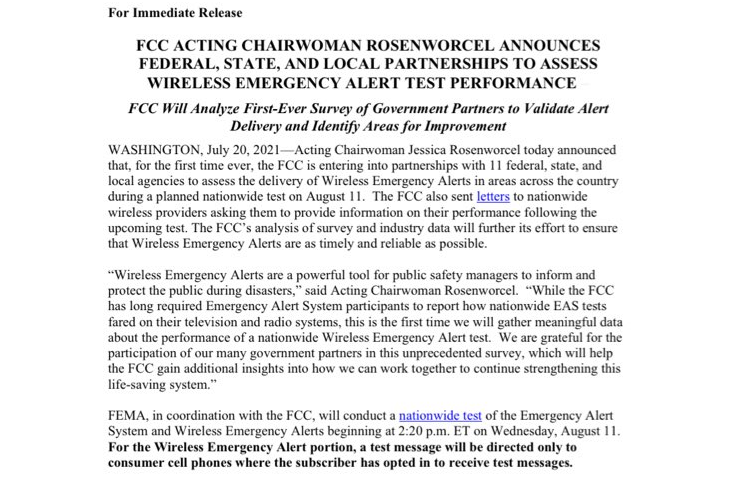 Obama to shut down airwaves on November 9th UPDATE

President Obama signed an executive order this week (July 12, 2012) that could give him control over the web in times of emergency.

According to The Verge, critics of the order are concerned with Section 5.2, which is a lengthy part outlining how telecommunications and the Internet are controlled. It states that the Secretary of Homeland Security will “oversee the development, testing, implementation, and sustainment” of national security and emergency preparedness measures on all systems, including private “non-military communications networks.” According to The Verge, critics say this gives Obama the on/off switch to the Web.

Click on the button for the best in news