The hurricane-ravaged East Coast has been receiving north Alabama assistance, but a Decatur Utility crew turned around after they learned they could not help in New Jersey unless they were affiliated with a union.

The general manager of Decatur Utilities, Ray Hardin, told Fox Business Friday morning they were presented documents from the International Brotherhood of Electric Workers at a staging area in Virginia. The documents stated they had to affiliate with a union to work, which the crews would not agree to.

Let me just say I for one never cared for Chris Christie. He never joined the other States in opposition to Obamacare . He has a penchant for appointing judges who are Muslim and have a penchant for Sharia law. I didn’t care for the way he fawned over Obama when he stopped by for his Photo-op. Especially when he made it clear he had that 1:00 am phone call from Obama. So we have another faux GOP politician that America will no doubt be happy to step up and support in 2016 if things don’t go Romney’s way next week. Enjoy your Photo-Ops Christie. I know you care. How do you like him now Ann Coulter? Here we go:

Unless, of course, that red tape is enforced by Obama’s union cronies. Then stranded residents have to wait.

How desperate is hurricane-ravaged New Jersey? Not desperate enough to suspend a union monopoly that keeps the state in the bottom ten states for economic competitiveness (and #48 for business friendliness). Relief crews from Alabama who were specifically called to New Jersey found themselves diverted to Long Island, NY after they arrived because they use non-union labor. Alabama is a right-to-work state. 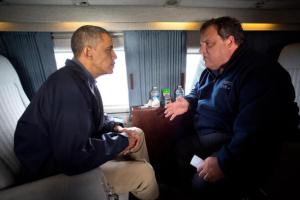 Crews from Huntsville, as well as Decatur Utilities and Joe Wheeler out of Trinity headed up there this week, but Derrick Moore, one of the Decatur workers, said they were told by crews in New Jersey that they can’t do any work there since they’re not union employees….

Understandably, Moore said they’re frustrated being told “thanks, but no thanks.”

With so much at stake–and lives still in danger–it would seem logical to tell special interests to step aside.

The devastation of the town the crews were to have assisted–Seaside Heights, NJ.

We can just bet that Davis-Bacon prevailing wages will be required which should add billions to the cost of reconstruction. No doubt a steady drip of the deals cut between these two fine fellows will be revealed in due time.