A few interesting developments among the so-called China watchers.  There is nothing for you to do about this, of course, but I thought it would provide at least some amusement.  So, there is this fellow named Sandeep Dhawan who writes advice to the US State Department suggesting what they ought to do about China.  I’m sure the State Department appreciates this advice — the Lord knows if anyone needed advice, it’s the US State Department.  Sandeep’s bona fides include the fact that he’s a former commander in the Indian navy.  I found this curious, so I did a few minutes of G-searching and could not find one single incident where the Indian Navy ever distinguished itself in a combat role at sea.  Well, it may not matter. 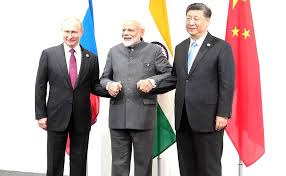 Sandeep is concerned because, as the United States withdraws from its foreign outposts, China is moving in to “fill up the vacuum.”  Moreover, Chinese Foreign Minister Wang Yi’s latest visit to the Middle East seems to indicate (to Sandeep) that China is definitely “moving in.”  Now, maybe it’s just me, but … so what?  Yi’s vow to “work with Saudi Arabia, Turkey, Iran, UAE, Bahrain, and Oman to “help protect their core interests against foreign interference” doesn’t bother me in the least.  More to the point, if Iran invaded Saudi Arabia tonight at midnight, I couldn’t care less.  Remember, I have long advocated that the solution to the petty tyrants in the Middle East is to convince the Saudis that the Iranians are good to eat.  Sorry, my friends, but I don’t care if China spends all of its silver taels on Algeria, Egypt, Palestine, Eritrea, or on Huey, Dewey, and Louie.  In fact, I think China should spend all their money in the Middle East.  We American taxpayers need a break.

Note:  I wonder if China realizes that all those countries hate each other almost as much as they hate us?

What does concern me, however, is that given America’s hunger for Chinese-made plastic bowls, it will be OUR spending at Wal-Mart that will actually fund China’s mischief in the Middle East.  Painfully, we all know that the average female shopper at Wal-Mart would trade in her first born son for a set of eight plastic storage bowls if they come in multiple colors.  Yeah, patriotism is important, so long as it doesn’t interfere in plastic storage ware.

Meanwhile, Russia’s Putin and China’s Xi are forming a mutual support arrangement.  They didn’t do this when Trump was president, of course … they know what a war hungry maniac Trump was.  But now that Joe Biden’s in the White House … well, off come the gloves.  Truly, this IS the danger of electing a nitwit to the presidency, and a former prostitute as his Vice … do you think anyone in the old country will respect America’s leadership, or will they take advantage of the opportunities handed to them by the American voter?

Note:  I don’t know for a fact that Kamala Harris ever was a prostitute, but that’s what Peter, who comments here, said — and it may all boil down to how one defines prostitution, but for the record I trust Peter, and this should go a long way toward reducing what I owe him.

But let’s be optimistic … even assuming that China and Russia “divide the world” among them, so what?  At some point in the future, the American dim-bulbs who voted for Biden will be called away and we’ll end up with a president with cajones.  After this new president nukes everyone one who is friends with China or Russia, the world will belong to us.  Then we can start fighting among ourselves, which is what we like to do almost better than anything (except Wal-Mart shopping).

Mustang’s take on the post Chinese checkers in the Middle East: Play or Perish

24 Responses to “Back to Chinese Checkers”