Mexico border towns are full of baby formula.  Surprise. Maybe we could ask the “immigrants” coming over to snag some on their way here.

If you have no problem whatsoever with aborting children up to birth why would you care about baby formula either?  Enfamil actually is an American brand. It’s safe. Mexico has it on the shelves and we don’t. Connect the dots? The Breitbart sent folks to wander down Mexico way and crossed the border.

Breitbart Texas dispatched local reporters to document the availability of baby formula in various Mexican cities, including several along the U.S. border.

In the city of Piedras Negras, opposite Eagle Pass, Texas, the Soriana Supermarket is fully stocked for infant nutrition items. 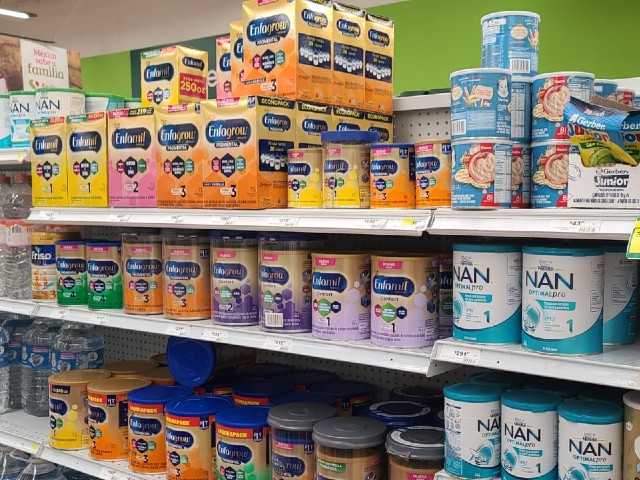 Picture from Breitbart.. more pics and locations at their site.

Biden Administration is slow to respond to a severe shortage of baby formula in the United States, stores throughout Mexico are fully stocked especially with the high-demand Enfamil brand.

Within the past week, the FDA announced that it would ease regulations to allow for the importation of formula. Experts cautioned that shelves would not be stocked with the imported goods for more weeks to come, however.

No shortage though so says the FDA. Thats why the Defense Production Act was put into play.

President Biden announced Wednesday that he will invoke the Defense Production Act to address the baby formula shortage, meaning suppliers will be required to give resources to infant formula plants before sending them to other customers.

The Defense Production Act, enacted in 1950, authorizes the president to require companies to sign contracts or fill orders for products needed for the nation’s defense. It also lets the president make sure price gouging doesn’t occur and gives the president freedom to incentivize the expanded production, with loans and purchase commitments.

36 Responses to “Mexico Shelves Are Full Of Baby Formula”

« PA 21,000 Mail Ballots to be ‘Hand Marked’ Due to Printing Error
Manchin Attacks Interior Sec Haaland in Energy Hearing: ‘It shuts Everything Down! »
%d bloggers like this: