Welfare? because it pays….

Because it pays … By Mustang

Considering the total amount of welfare spending, welfare fraud is but a small percentage. This, at least, is the argument posed by the defenders of state welfare. On the other hand, interviews with welfare recipients where the questioner has gained a high level of trust with his subject illustrates that most welfare recipients fail to report their total income and that just over 80% of these recipients are willing to cheat because there is only a 16% chance that their dishonesty will be discovered. It’s a game —and one that pays good dividends.

Welfare fraud, while widespread, is mostly committed by people who struggle financially. In a study conducted in 2012, 88% of welfare recipients admitted that they regularly cheat, either to maintain their benefit, or toward increasing it. The 2012 study was remarkably consistent with one conducted in 1988, where 80% of Chicago blacks worked either full or part time but failed to report their income to the welfare office. In 1974, a study of 450 welfare recipients in Orange County, California discovered a 45% fraud rate; in less than ten years, this number increased by 729%.

In 2016, investigators in the Social Security Administration received 143,385 allegations of fraud. They opened 8,048 cases; 1,162 people were eventually convicted of fraud. This was a small percentage of individuals ever going into court, but the government claims to have recovered $52.6 million while imposing $4.5 million in fines.

Note: I’m not sure how the government “recovers” stolen benefits. What I do know is that fraud perpetrated against the Social Security Administration Trust Fund threatens the integrity of the fund and blocks access to needy applicants with legitimate claims for benefits

By 2017, resulting from advances in medicine, safety devises, and an overall decrease in positions demanding manual labor, the numbers of people unable to work actually decreased since 1960 … but the percentage of people qualifying for federal benefits because they are unable to work actually increased. The only explanation, given that the legal definition of physical disability hasn’t changed since1960, is an increase in fraud.

In addition to the Social Security Administration, fraud also exists within the Department of Housing and Urban Development, Department of Labor, and the Department of Veteran’s Affairs. In the first half of FY- 2012, the IG of the SSA detected frauds amounting to more than $253 million. If we extrapolate this through the entire fiscal year, over $500 million dollars of public assistance money was stolen by recipients of welfare or assistance.

There are also prison costs, and the cost of foster care when single mothers are incarcerated. In 2008, California spent three times as much in policing welfare fraud as its cost of welfare fraud overpayments. Now of course, state comptrollers have concluded not to prosecute fraud —it is cheaper to just turn a blind eye.Why do they do it? Because it pays.

Welfare fraud more often than not reflects the idea that 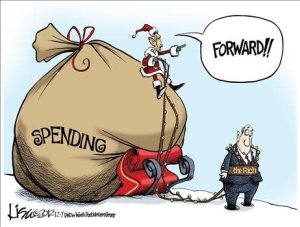 citizens have a moral right to proper financial support from county, state, and federal governments. They think this because politicians continually reinforce this kind of thinking. The fact is, more than one-half of adultAmericans receive more money in government payments than they pay in federal taxes —this according to the Congressional Budget Office. The lower one’s income, the more benefits they receive, and the wider the disparity between benefits received and taxes paid.

CBO tells us that the lowest income earners pay only $400.00 in taxes yet receive $16,000.00 in benefits. They receive more income after taxes than they do before taxes. So, the question is, who is paying for this disparity?

This is not a problem if one happens to be a Democrat. “From each according to his ability, to each according to his need” is a popular refrain among Marxists. Still, the sentiment does provide an effective strategy for recruiting political support. Ludwig von Mises instructed us that once we reach the point where a majority of voters receive more in benefits than it pays in taxes, they will demand even more from the government and be politically positioned to demand it. The more this political majority demands fromgovernment, the greater the government’s assault on a diminishing number of middle and higher-income people taxed to support welfare programs.

According to the Cato Institute, the federal government in 2014 spent $688 billion on 126 separate welfare programs. Spending by state and local governments pushed this figure well over $1 trillion. Leftists like to quibble over these figures, though. They’ll argue that $55 billion is refundable as part of the Earned Income Tax Credit, $21 billion to Temporary Assistance for Needy Families (which, given the history of welfare payments in the United States, isn’t temporary at all). $44 billion is the figure attached to Supplemental Security Income; $75 billion for food stamps, $18 billion for housing vouchers. Medicaid spends $228 billion on the non-elderly population, with children’s health claiming $13.5 billion. Added to this are Title 1 grants of $14 billion and Head Start programs of $10 billion. 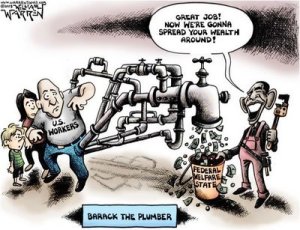 If the Cato figures tell us anything at all, it is that the United States and its so-called Great Society lost the war on poverty … a presumption on my part based on the fact that such programs haven’t accomplished raising the poor up into the middle class. All it ever did was increase the rolls of voting Democrats. Given the fact that registered voters have an iron in the welfare fire, it makes one wonder if these people shouldn’t recuse themselves from voting. After all, it isn’t as if they’re giving much thought about who to vote for.

There is no civic virtue on the American left.

I do believe that each of us has a duty to help our neighbors in need. Giving to the poor is laudable act when private citizens make those kinds of decisions. This isn’t what happens in Marxist run countries, however: private citizens don’t decide —the government makes that decision for them. The government decides how much the wage earner will “donate.” Government decides how we define poor, and who qualifies for taxpayer-funded assistance. Government even decides how this money will be extorted and the penalty for withholding it.

This is the Democratic (communist) political platform. We now live in a society where the political majority consist of those who benefit most from government largesse. Who are they —these leftist voters? They are people who do not, and will not work for a living. They are people who feign illness or injury so that the government will pay them to stay home and watch television.

They are the millions of illegal aliens here now (and those who are in the way — the communist left’s future voters). They are the literally millions of people who refused to stay in school, people who’ve made a mess of their lives, who produce more children than they can afford, and now expect the American taxpayer to bail them out. These numbers, by the way, far exceed the numbers of our truly-needy elderly and disabled citizens —and they too are loyal Democrats, because this is the party that consistently frightens into thinking that the other party may cause them to lose their benefits.

If these genuine recipients ever do lose their benefits, it will be because the communists have squandered precious monetary resources recruiting young voters into the Democratic machine.