Carl Clemons-Hopkins became the first non-binary person to be nominated for best supporting actor at the 73rd Emmy Awards on Sunday. Here is what we have to look forward to that will be coming soon to our flatscreen. While AOC got all the attention for her “tax the rich” outfit compliments of Chick fil-A, a grander vision was with this fine fellow.

To celebrate, the “Hacks” actor walked the red carpet in a custom Christian Siriano outfit inspired by the non-binary flag, according to the designer. The actor’s white button-down shirt, black trousers, purple belt, and purple and yellow train featured the colors of the flag.

The outfit was created as “an homage to the non-binary flag and celebrating our identities and beauty beyond the heteronormative standard,” Clemons-Hopkins’ stylist, Jyotisha Bridges, wrote in an Instagram post on Sunday.

The star reflected on how they came to identify as non-binary in an essay penned for The Hollywood Reporter in July, writing that they began to identify as queer in college before exploring gender norms during lockdown.

“In the past five or six years, I’ve been doing a lot of studies on the origins of masculinity, where all these rules and norms came from. At the same time, there’s been so much violence and misunderstanding with trans folk and other queer people,” Clemons-Hopkins wrote.

Just noting that the swamp is devastating our culture and desensitizing us.

We get a keen insight as to how the Biden/Obama/Soros organization plan on controlling  Kamala Harris. Before announcing Harris as VP candidate, they already lined up her Chief of staff – no less than from the Obama administration, and of late MoveOn.org. 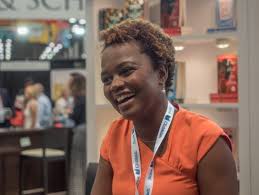 Earlier this year, she began serving as a senior adviser to Joe Biden’s presidential campaign.

“So here’s the plan: We’ll support MoveOn.org members to call out and nonviolently protest Trump’s racist, bigoted, misogynistic, xenophobic, and violent behavior — and show the world that America rejects Trump’s hate, ” the email read. “And to keep it going, we’re counting on you to donate whatever you can to cover the costs of everything involved — the organizers, signs, online recruitment ads, training, and more.”

“Karine is a talented and fiercely intelligent individual who has worked to advance progressive values, candidates and policies throughout her entire career,” MoveOn Executive Director Rahna Epting wrote in an email to the Bay Area Reporter. “Her appointment as chief of staff to our next vice president during this campaign is a testament to her level of skill and dedication. MoveOn members are proud of Karine and confident that she will make the Biden and Harris campaign to be the best it can be.”

During Obama’s first term, she worked in the White House Office of Political Affairs, a position said was important to her as a lesbian.

“What’s been wonderful is that I was not the only; I was one of many,” she told The Advocate in 2011. “President Obama didn’t hire LGBT staffers, he hired experienced individuals who happen to be LGBT.”

“Serving and working for President Obama where you can be openly gay has been an amazing honor. It felt incredible to be a part of an administration that prioritizes LGBT issues.”

People who have followed the 2020 Democratic primary closely may remember Jean-Pierre from a viral video of a white, male animal rights activist taking Harris’s microphone away from her during a 2019 MoveOn forum with Harris.

Jean-Pierre leapt to her feet up to grab the mic back. Our gal in action:

Even better, Democratic strategist and NewsHour analyst Karine Jean-Pierre has written a book, “Moving Forward,” in which she shares her experiences growing up as the eldest child of Haitian immigrants. Jean-Pierre sits down with Judy Woodruff to discuss her parents’ pursuit of the American dream, her struggle with mental health, why young people should make their voices heard and beating Donald Trump.

These past few years have been tough. But we're tougher.

Join me as I reflect on the past, think about the present, and look ahead to the future of this country. #MovingForward is for anyone who is searching for hope in these hard times.

If we had any questions as to who and how a Biden administration will operate, I would say looks like the Obama clan is moving in.

One can only wonder why they come to our shores and are determined to turn our country into the hell hole they come from. Go figure. From the clip:

Karine Jean-Pierre MPA ’03 is the chief public affairs officer for MoveOn, an NBC and MSNBC political analyst, and a SIPA lecturer. Her memoir, “Moving Forward,” chronicles her experiences growing up in New York’s Haitian community to working in the Obama White House.

Other than that, everything swell in the swamp.

I happen to enjoy watching this nice couple that has a very popular program on H. and G. They fix houses Yes, a normal couple. No, not five wives, not 500 lbs, not some sort of bizarre behavior with tons of problems. BUT they are Christian. The media managed to knock off one H and G show because the guys were Christian and didn’t support gay marriage. Off with their heads. This couple is saying nothing. But their church? Here is the story:

I only know two things about Chip and Joanna Gaines: 1) My mom is obsessed with their HGTV show, and 2) Chip is a big doofus and apparently the luckiest man alive. Home-renovation shows aren’t really my thing, but they seem like a nice couple and they do nice things for people. Look up the word “nice” in the dictionary and you’ll see a picture of those two, surprising you with how wonderfully they’ve renovated it.

But they’re also devout Christians. So, of course, they must be destroyed. Kate Aurthur at BuzzFeed has the grim, socially unjust details:

Their church, Antioch Community Church, is a nondenominational, evangelical, mission-based megachurch. And their pastor, Jimmy Seibert, who described the Gaineses as “dear friends” in a recent video, takes a hard line against same-sex marriage and promotes converting LGBT people into being straight.

So are the Gaineses against same-sex marriage? And would they ever feature a same-sex couple on the show, as have HGTV’s House Hunters and Property Brothers? Emails to Brock Murphy, the public relations director at their company, Magnolia, were not returned. Nor were emails and calls to HGTV’s PR department.

Well, Chip and Joanna have the right to their religious beliefs. And if you don’t like those religious beliefs, you don’t have to watch their show or otherwise support them financially. People like Kate Aurthur and all the other miserable creeps at BuzzFeed can keep finding ways to turn Americans against each other, and the Democrats can keep losing elections and wondering what the hell happened. It works out fine for everybody.

The White House performance by Shi-Queeta Lee took place on November 17. Historians should mark the date as another milestone in our self-imposed decline. In case you missed the live broadcast, I am giving you another opportunity. If Obama thinks he is doing anything for the Lesbian and Gay cause he is sadly mistaken. He makes a mockery of Gays and Lesbians who are living their lives as normally as they can and foisting this upon us and on the White House. Here is the report from OUT:

Local D.C. drag queen Shi-Queeta Lee was invited to perform and mother served the kids some Tina Turner tease, performing (and dropping into a split for) “Proud Mary.” Shi-Queeta may have been the first drag queen to perform at The White House, though honestly, who knows what J. Edgar Hoover was doing on the weekends.

The briefing was live-streamed on whitehouse.gov, but in case you missed it, Ms. Lee shared the video of her performance for the world to enjoy and kick a leg up to:

More than a Hat Tip goes to OUT

Hint Sally, if one believes in Sharia one is not Progressive. Amazing isn’t it. How there is zero discussion of exactly what Sharia law entails and specifically how it handles the LGBT Community. Sally’s website says thus which no doubt explains her ignorance: 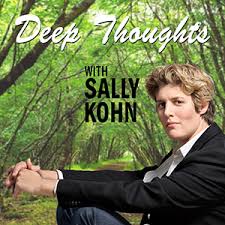 “a former community organizer who prefers baggy clothes and doesn’t own a television.” — The New York Times 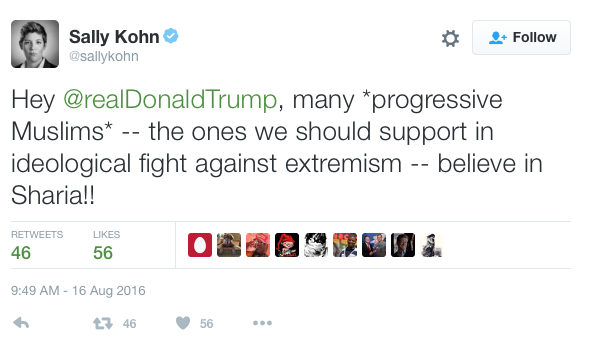 Sally, who is gay and a CNN commentator might want to visit the CNN newsroom, take a look at some videos, especially this one done by CNN and watch how Sharia law deals with the LGBT Community since she doesn’t own a T.V.

Sally Kohn, a former senior strategist at the Soros-funded Center for Community Change, had been hired as a Fox News Contributor previously.

Kohn worked at the Center for Community Change, one of the leading Soros-funded groups, for six years, from 2004—2010. During this period, the group received $5.8 million from Soros’s main vehicle, the Open Society Institute (OSI).

“Sally Kohn makes the world safe for radical ideas,” her website says. In fact, Kohn is a far-left radical who attended the 2003 World Social Forum in Brazil, a meeting place for groups which say they are opposed to capitalism and U.S. imperialism. The 2011-2012 “Calendar of Struggles” for the World Social Forum Full Story at: Accuracy in Media From my previous post Soros activist hired by Fox. So much for fair and balanced. January 21, 2012 Bunkerville

Little mentioned this weekend, as the Nation attempts to grapple with the latest edict spewing forth regarding bathroom access, was that this is not just limited to bathrooms. Even more intrusive is that this applies to locker rooms and showers as well. And why should it stop at just school age children? Let’s wreck our common sense norms at any cost. Here Josh Ernest with his best cavalier attitude.

White House spokesman Josh Earnest told reporters Friday that the administration issued specific suggestions along with its directive for public schools nationwide to allow students to use bathrooms and locker rooms according to their gender identity (rather than their biological sex) and that one suggestion is “just putting up curtains” in school locker rooms.