I figure we could use some news that we we aren’t getting elsewhere. I culled twitter for some nuggets for a Monday morning. Sure Biden is leading in all the polls.

It may take a second for the page to load.

HOLY HELL! Joe Biden Looks Like Death in Erie, Pennsylvania — Something Is Wrong with Old Joe!

On Saturday Joe Biden held a small rally with about 12-20 people in Erie, Pennsylvania, including staff.

During his speech AP reporter Carolyn Castor took this photo of the former Vice President. Later the photo was taken down. 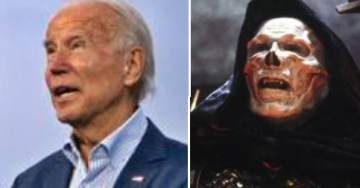 Biden and Harris hold a campaign event in Arizona and the local news can’t believe that not one supporter showed up! pic.twitter.com/JKj0fPi6Jj

HUGE! VP Mike Pence Draws 4,000 in Florida — More Supporters than Joe Biden Has Seen at ALL RALLIES ALL YEAR! https://t.co/Gv91x0KYyR

.@JoeBiden and @KamalaHarris bus came through Yuma! So many supporters excited to finally be able to cast their vote for #BidenHarris pic.twitter.com/Bb6eRSUalM

The media won’t talk about it, but there are THOUSANDS of Miami residents out in a car parade right now for @realDonaldTrump!! Cuban Americans will KEEP FLORIDA RED, help re-elect TRUMP, AND KEEP REPUBLICAN MAJORITIES TO SAVE AMERICA 🇺🇸 pic.twitter.com/okYm8kEM5O

The best of the swamp. Have a great day.

Kamala Harris meets with Blake family ‘They are an incredible family’

There was a “sighting” of Kamala Harris in Wisconsin. It looks like it went swell. Blake’s family was first on the agenda and it looks like her presser even went better.

Kamala Harris flew private to meet with a man accused of raping a woman in front of her child.

Welcome to the Democrat Party.

Harris met with members of the Blake family as she made her first appearance in Wisconsin since being selected as Democratic presidential nominee Joe Biden‘s running mate. Harris met with the family and members of Blake’s legal team at a private airport in Milwaukee, a Biden campaign official said, adding that Harris spoke with Blake by phone during the meeting.

We can only hope America figures out how radical a Biden/Harris presidency will work out.

Otherwise all is swell in the swamp.

The crowd was faked -along with a whole lot more. We can only hope that the GOP can do a better job than the DNC and have real live people.

The DNC faked the crowd of supporters.
They used double images of the same people to make their crowd shot!

Kamala’s applause live-stream was actually meant to be an accurate representation of 30 Democratic voters in New Jersey. pic.twitter.com/WfGecOScx0

After she was done there was dead silence and then some women only appeared on a screen and she waved at them.
It did not look like they could see her because they did not react.

Two men tell Senate not Kavanaugh but they who assaulted Ford

I say she is a no show. But if she does I am at the ready.

Two men tell Senate that they, not Kavanaugh, assaulted Ford

Two men tell Senate that they, not Kavanaugh, assaulted Ford … Man apologizes for making false allegation against Kavanaugh … men have come forward to members of the Senate Judiciary Committee to claim that they are..

Two men have come forward to members of the Senate Judiciary Committee to claim that they are the ones who actually assaulted Christine Blasey Ford during a house party in 1982 — and not Supreme Court nominee Brett Kavanaugh.

Republicans on the committee released a timeline of events late Wednesday, which included details about their interactions with the two men who admitted to the attacks.

Just getting more and more bizarre. Thanks GOP you really done yourself something.

By now we are up to how many accusers against Kavanaugh? By the time this posts I am sure it will be more. No need to be clever here. I have the popcorn at the ready. My blood pressure meds. I am a go. Now for the hearing? Will Ford show? Doubtful at this point.

Of all the creatures who are attacking Kavanaugh, Blumenthal is the most disgusting.

Why we should believe Blumenthal? Let’s nail this fellow.