There are hundreds of protesters from the January 6 incident at the Capitol languishing in a special cell block in a D.C. prison in solitary confinement.  The most well known is “QAnon Shaman,” Jacob Chansley. In shades of Stalinist Russia, he has been moved to a federal prison in Colorado for the infamous “forensic evaluation.” If found too ill to stand trial he no doubt will be sent to a mental institution until such time as he is “fit to stand trial.”

These poor souls are not getting the attention they deserve. They are being rounded up all over America.

NBC News reporter Scott MacFarlane reported Monday that the so-called “QAnon Shaman,” Jacob Chansley, is being transferred from the jail in Alexandria, Virginia, to Colorado where he’ll undergo a forensic evaluation, according to the Justice Department.

“Specific details were confirmed with the government that that use of a spear or a finial on a spear dates to the Native Americans, a fact consistent with the Shamanic faith of the defendant,” the motion continues. “It was further noted for the government that the U.S. Army uses the spear finial with open wings on the sides, however, the traditional Native American design only contains the central point, akin to the defendant’s flagpole.” 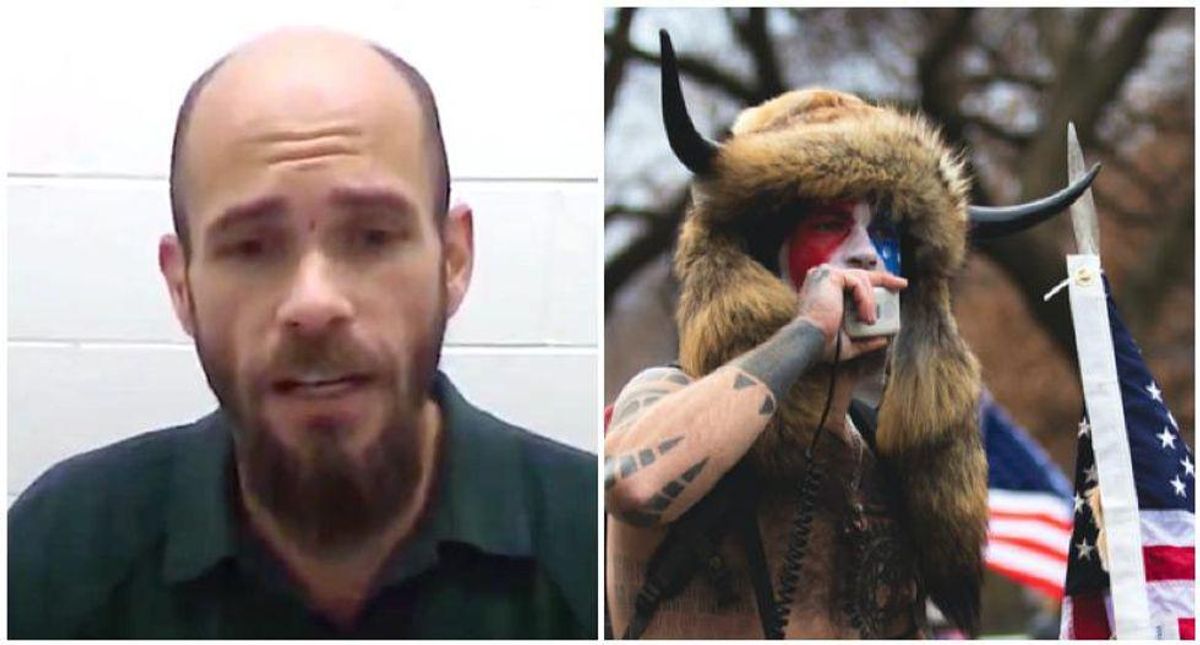 Backing up a bit:

A federal judge ruled Monday that the man often called the “QAnon Shaman” must remain in jail pending his trial for his role in the Jan. 6 siege of the U.S. Capitol because he remains a threat to the public.

Judge Royce Lamberth said in his order rejecting Jacob Chansley’s request for release that “no condition or combination of conditions” would ensure Chansley’s return to court if he were released.

Lamberth said Chansley believes his actions during the siege of the Capitol, an attack in which five people died, were peaceful. That mindset, Lamberth wrote, shows “a detachment from reality.”

“Defendant characterizes himself as a peaceful person who was welcomed into the Capitol building on January 6th by police officers,” Lamberth wrote in the order. “The Court finds none of his many attempts to manipulate the evidence and minimize the seriousness of his actions persuasive.”

Lamberth declined to release him and focused, in part, on the accusation that Chansley stormed the Capitol with a dangerous weapon. Chansley’s attorney described it as a flagpole with a “spear finial.”

Little of the reported 12000 hours of footage from January 6 has been released. Yet those accused have no access. No one died from the so called “armed insurrection” except one of the protesters. Thanks to Rumble we have this one.

One officer, identified in the video and confirmed by charging documents as Officer Keith Robishaw, appears to tell Chansely’s group they won’t stop them from entering the building. “We’re not against . . . you need to show us . . . no attacking, no assault, remain calm,” Robishaw warns. Chansley and another protestor instruct the crowd to act peacefully. “This has to be peaceful,” Chansley yelled. “We have the right to peacefully assemble.”

Welcome to America. The best of the swamp today.

In another politically correct move, Statuary Hall located  in the Capitol will be having a new look. No doubt in a move to highlight the cultural phenomenon that changed Arkansas. Out go supposedly Confederate Statute fellows replaced with musician types. Johnny Cash is coming to Statuary Hall

Look, I got it, with reparations under discussion, the Civil War history needs to be cleaned up and moved out. But Johnny Cash? It is claimed that Clarke, who was once a US Senator, held segregationist views and Rose had sided with the Confederacy. They are moving out. I vote for Rocky Balboa next. Why not?

The Statuary Hall Collection comprises 100 statues, two from each state. It was created by an act of Congress in 1864 to allow each state to commemorate “deceased persons who have been citizens thereof, and illustrious for their historic renown or for distinguished civic or military services.” Decisions about which individuals to memorialize are made by state legislatures and governors.

The installation of Confederate leaders in the seat of American political power is neither accident nor oversight. In happened in the early years of the 20th century with the emergence of the so-called Lost Cause myth, which idealized and whitewashed the Confederacy’s origins and existence.

Each state is allowed to have two statues on display and are permitted to replace them as long as they cover the costs.

Thanks to WhatFingerNews for the coverage! A great site for all the news.

What’s up with the New Madrid Fault line and FEMA and HAARP?

May 20, 2011 — bunkerville
Time for a change of pace! We will soon find out!
I have purchased a supply of Food Stores from Mountain House “Just in case” of bad times ahead. They have been sold out for some time.  Here is a surprise which I found on their website and their statement regarding a FEMA request::
The purpose of this Request for Information is to identify sources of supply for meals in support of disaster relief efforts based on a catastrophic disaster event within the New Madrid Fault System for a survivor population of 7M to be utilized for the sustainment of life during a 10-day period of operations.

Imagine my surprise when I caught this story over at: Before it is News

There Is Evidence That HAARP Has Been Turned Up Again And Its Target Is The New Madrid Fault Line  HARP:

(HAARP) is an ionospheric research program jointly funded by the US Air Force, the US Navy, the University of Alaska and the Defense Advanced Research Projects Agency (DARPA).[1] Its purpose is to analyze the ionosphere and investigate the potential for developing ionospheric enhancement technology for radio communications and surveillance purposes.[2] The HAARP program operates a major Arctic facility, known as the HAARP Research Station, on an Air Force owned site near Gakona, Alaska.

Here is the Home Page for HAARP Here

Before it is News A quote pulled from the FEMA website states the following:

“The NLE 11 functional exercise, which will simulate a catastrophic earthquake in the New Madrid Seismic Zone, is scheduled to take place at venues in the national capital region and throughout the central U.S. These exercise activities are being carefully balanced with the current flooding and tornado-related disasters that FEMA and its partners are responding to, and adjustments have been made to exercise plans accordingly.”

If you are in the New Madrid fault line areas in Indiana, Illinois, Arkansas, Kentucky, Missouri, or Tennessee, be on the look out for glowing clouds, which are a signal of HAARP energy coming through the clouds and being directed into a particular location.There is now strong evidence coming from the HAARP induction magnetometer that shows several distinct beams which are being transmitted into the region on full blast.These signals were seen in the Haiti earthquake, and forty hours later there was a devastating earthquake. In Japan the induction magnetometer again showed a beam, and fifty-five hours later we saw the recent Japanese disaster. Now we are seeing these signals again, only now there are four distinct signals reading off the scale, all going off at once. Whatever it is they are doing, it should be huge.If this attempt is successful, very soon we will see a tremendous earthquake, and it’s self evident that it will be in the New Madrid fault line area.

You may be interested to know that FEMA is also conducting a large weeklong exercise in the New Madrid region that will simulate a catastrophic earthquake.

Read more here: Before it is News

In response to the recent concern of FEMA purchasing Mountain House products:
The Federal Emergency Management Agency (FEMA) procures and stores pre-packaged commercial meals to support readiness capability for immediate distribution to disaster survivors routinely. The purpose of this Request for Information is to identify sources of supply for meals in support of disaster relief efforts based on a catastrophic disaster event within the New Madrid Fault System for a survivor population of 7M to be utilized for the sustainment of life during a 10-day period of operations.
As you know we have removed #10 cans from our website temporarily. The reason for this is sales of #10 cans have continued to increase. OFD is allocating as much production capacity as possible to this market segment, but we must maintain capacity for our other market segments as well.