Sunday Respite – ‘I’m Thinking of You’

Summer seems to be slipping away from us. A bit of sadness can set in with thoughts of past seasons that came and went. The roughness of the political scene. Anger. Disappointment. Discouragement.

The selection of music I have selected seems to fit the mood perfectly.

It’s been a hard week for many of us.

Sit back and  relax a bit with some Edgar Tuniyants.

The musical composition of Edgar Tuniyants – I’M THINKING OF YOU

If you missed Saturday’s post, take a wander over for a break. May bring a smile or two.

Saturday Passel of Potpourri – August This and That

The agenda included in the Inflation Reduction Act of the IRS-

In the original BBB bill, this section took up a page. Now, it’s ten pages long.  It starts on page 1926 of the current version of H.R. 5376 and on page 39 of the Senate’s draft Inflation Reduction Act; versions are slightly different but the total is the same. In the $45 billion enforcement section, we’ve got “…to provide digital asset monitoring….”

If that doesn’t make the hairs on the back of your neck stand up I don’t know what will. The IRS should be concerned only with assets it suspects are being funded through tax fraud and it doesn’t take $45 billion to do that. But to establish the ability to implement Senator Warren’s unconstitutional “wealth tax,” well, it might just be enough.

This is the mechanism that will digitally register every tax payer. And the rest of the individual monitoring that goes with it.

That’s what the expanding legislative money for the IRS is all about. They are going to build a new digital agency.

You will be assigned your carbon credits.

Biden plans to audit us all by unleashing 87,000 Revenue Agents on those making $200,000 and Less : •Gig Workers •Independent Contractors •Small Business •Hairdressers •Realtors •Seamstress Call The House at 1-202-224-3121 Tell them vote no.

The feds are not buying assault rifles to crack down on fraudulent W-4 forms.

America’s “deep state” now has more agents with firearms than the United States Marine Corps has soldiers. Last month, Rep. Matt Gaetz drew attention to this issue on Fox News, noting that the Internal Revenue Service has spent $725,000 on ammunition just this year. “Call me old-fashioned, but I thought the heaviest artillery an irs agent would need would be a calculator,” Gaetz said on Jesse Watters’s prime-time show. “I imagine the irs in green eyeshades and cubicles, not busting doors down and emptying Glock clips on our fellow Americans.

“So here’s the Biden plan,” he told Watters. “Disarm Americans, open the border, empty the prisons—but rest assured, they’ll still collect your taxes, and they need $725,000 worth of ammunition, apparently, to get the job done.”

Gaetz introduced a bill to Congress on July 7 called the Disarm the IRS Act, which would ban the agency responsible for tax enforcement from purchasing ammunition. Yet this bill probably will not pass, and it would do nothing about other agencies stockpiling weapons even if it did pass. It is understandable for the Department of Justice and the Department of Homeland Security to have some armed agents. But the fact that the Social Security Administration, Small Business Administration, and National Archives and Records Administration are stocking up on ammunition is concerning. Read more

Why are the Railroad Retirement Board & IRS stockpiling ammunition?

The Richest People Have A Plan For Food Shortages: The ‘Sniff Test’

A WEF video released Wednesday sang support for British supermarkets choosing to remove the “use by” or “best before” date on different types of produce. It is now suggested that citizens use a “sniff test” to establish the freshness of their food. Just the first step by the WEC to prepare for the coming storm.

Put this one down as stupid.

Apparently the decision is part of an effort to limit food waste, but the timing is highly questionable. Unless you’re living a one-hundred percent sustainable homesteading life, you’ve probably noticed that food prices are going up as supplies become scarce.

Back in May, Germany’s Economic Minister Robert Habeck said the then-impending food shortage would be a “catastrophe.” He noted that WEF could work with policy makers to tackle global hunger, and I guess this is their first attempt.

There are few things more stupid and evil than a group of people who think they know what’s best for people they don’t even know, and that’s exactly how one can define the WEF. Then again, maybe we should have never had “use by” dates on our food at all, so we could maintain a degree of our common sense when it comes to what we put in our bodies.

The best of the swamp

Another hot week here as the summer moves along. It’s hard to believe it’s August already. We still have some good summer days to visit the ocean and get in a stroll or two at sunset.

Giovanni Marradi – Soleado music should put us in the mood.

Wishing everyone a wonderful day.

Racially obsessed Arizona State professor has a radical axe as her instrument.

A professorial devotee of critical race theory (CRT) as it pertains to the teaching of music in higher education is doubling down on her highly personal struggle against the systemic oppressiveness of Beethoven and Mozart.

One of the telling signs of racism in college music departments is expecting students to know how to read sheet music, the professor explained, highlighting how classical music CRT aims to destroy foundational principles. “Notes aren’t racist. A [quaver], a [semibreve], they aren’t racist, but it’s how we use those things,” McCall asserted. “We weaponize Western notation to keep some people out, and to welcome others in. Because if you can’t read notation, you can’t get into the music schools.” 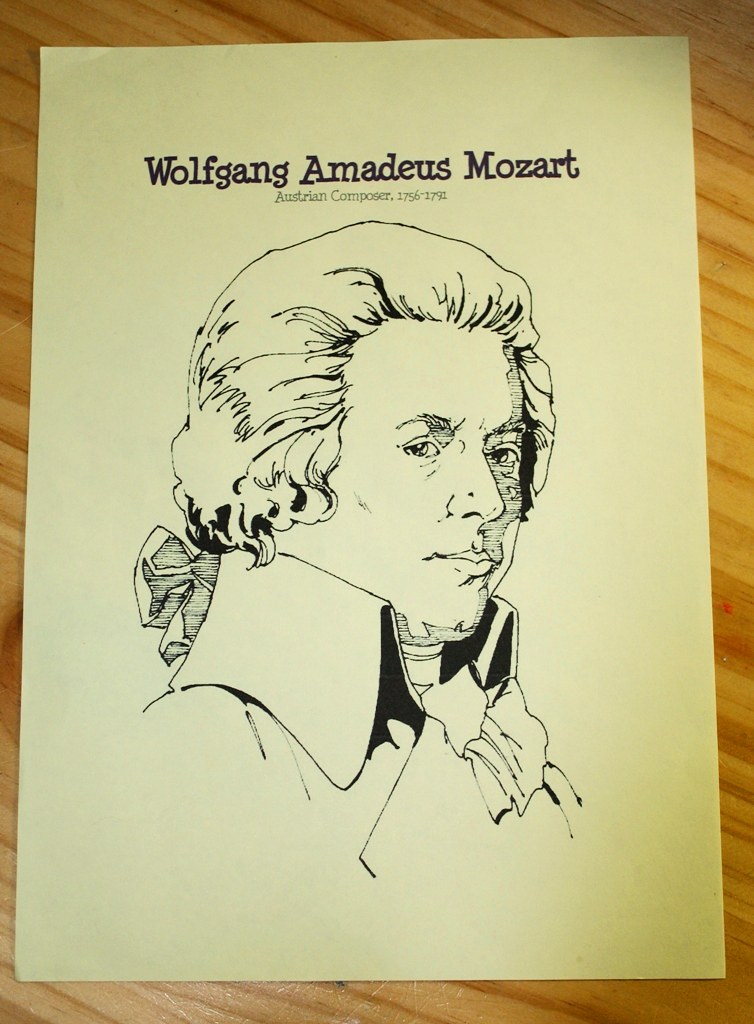 Wolfgang Amadeus Mozart is out

I wonder just how one progresses in a music department if one cannot read notation. I am thankful that I was given the opportunity to enjoy music of all varieties and was given the chance to learn to play various instruments. My life is fuller for it. But Critical Race Theory must destroy all aspects of our culture. Art will be the next to go. Count on it. Back to the story:

Arizona State University sparked controversy in July 2021 by hiring Dr. Joyce McCall to bring her particularly discordant campaign of “racial justice” to its campus. One year later, McCall gave an expansive interview to British national radio station Classic FM, and the quotes revealed her brand of classical music CRT. As exotic as she may sound, McCall’s words highlighted the crucial factor at the core of the progressive assault on education. CRT is designed to transform a culture on a full-spectrum level. Nothing that occurs in the realm of human activity is to be excluded. Even the roses must be trampled.

That this credentialed music authority figure at one of the largest state universities in America asked the following may reveal the utter poverty of knowledge on our nation’s campuses today:

“We can keep teaching Brahms and Beethoven and Stravinsky and, you know, a whole lot but we have to be critical of that music and ask, ‘Well, why do we put it on this pedestal?’ That’s something we should be asking about regardless of the genre of music.”

The intrinsic desire to elevate greatness – to nurture, savor, and extol it – is one of the hallmarks of any advanced civilization. The answer to McCall’s query is simple: We put high artistic achievement on a pedestal because it is good.

For the societal levelers of cultural Marxism, the explanation can never suffice. The brilliance of others is not a gift for the world to share. It is a provocation and a threat. Rather than praise a Thomas Edison for inventing the light bulb, they would choose to remain in the dark.

The best of the swamp today,

Take time to step away, settle back and enjoy a few moments from the fray.

Flaer Smin – Catharsis is my selection for my Sunday Respite. Wonderful photography goes with the music. Highly suggested is watching this in full screen. Better yet send it over to your flat screen.

For politics page down or check out top posts listed on the right side of the page.

An encore presentation from several years back, and another favorite of mine.

Wishing everyone a wonderful day.

A beautiful day here but hot. Here is some very special photography with music by one of my favorite composers.

Music by Vangelis – Conquest of Paradise

An encore presentation of one of my favorite videos. It is best watched in full screen.

We learn that the EU population declined last year again. Some of this can be allocated to Covid deaths, but the tale of the declining European stock can not be denied. Add to this the addition of the hordes of “immigrants” and we can see where this is headed. Here we go:

The EU has an aging population, with one in five people over the age of 65.

This means the natural change of the EU population is negative. While it’s been that way for about a decade, this decline had been masked by the net positive impact of migration, which was temporarily frozen due to the pandemic’s travel bans.

The data comes as the world nears its 8 billion mark. Despite natural declines in Europe and in several other countries, the world is on the whole seeing numbers continue to climb, albeit at the slowest rate of growth since 1950. India is set to become the most highly populated country on the planet as of 2023, overtaking China, according to the UN. An increasing population means there will be a greater demand for food, water and energy, placing more pressure on the world’s resources. 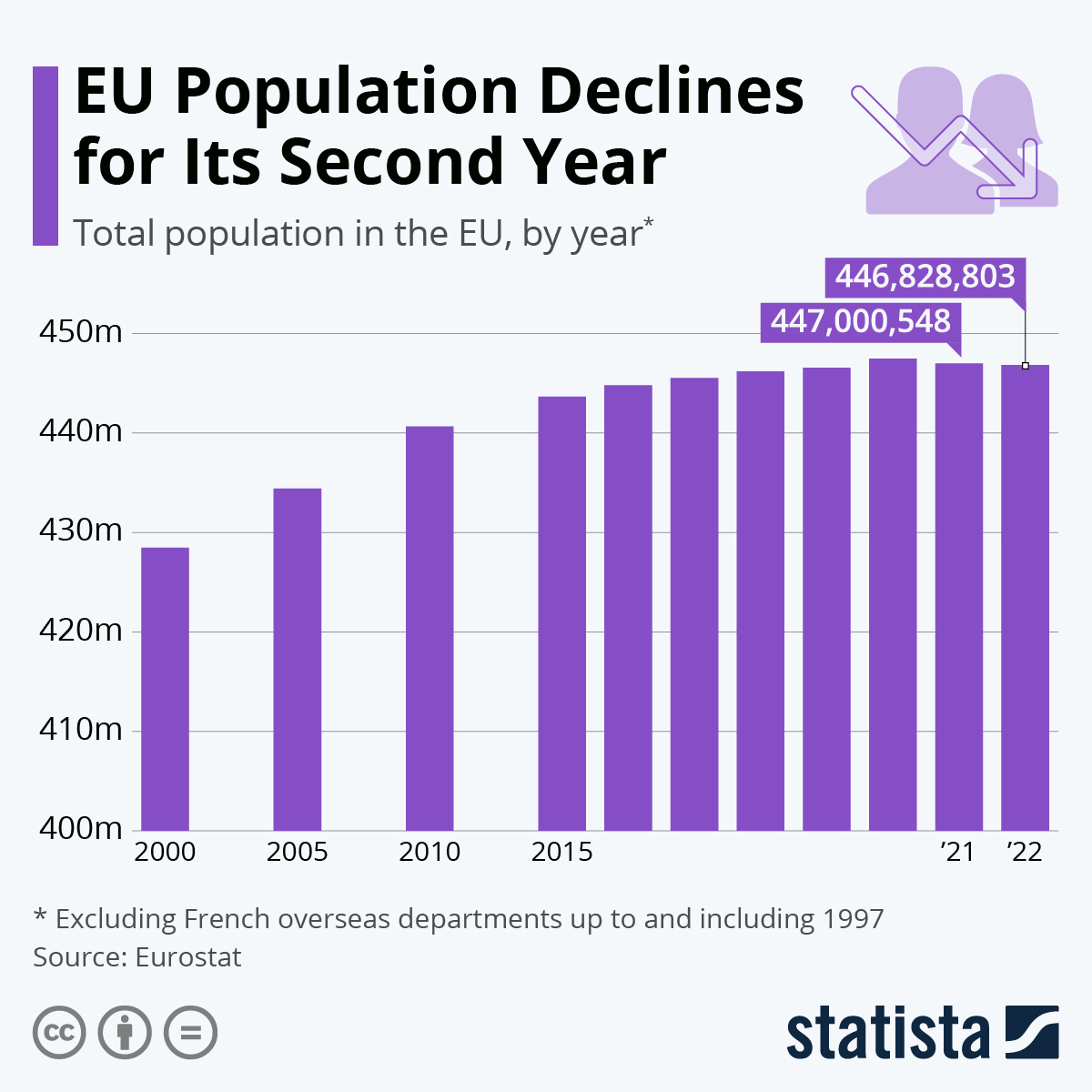 Combine the mass importation of “refugees” with Africa’s exploding population rate and you have effective genocide. If this continues, within a century Europeans will face a situation as grim as whites do now in South Africa. Another century after that and no one will even remember Europeans.

If Russia invaded, Europe would fight back. But to be conquered by Russians would be infinitely better than to be displaced out of existence by uncountable hordes of Africans, because there would still be such a thing as the future.

This is the insane reality of what’s actually happening.

The Truth About ‘Refugees’

While India may be the fastest growing economy, it is Africa population that is on the move and Europe is where many are headed. Four billion people before 2100, meaning that Africa will have a population on par with Asia. Back in a 2015 tweet:

The wise thing would be to change course.

Other than that all is well in the swamp

A hot summer day and what could be better than to chill a bit with Raimonds Pauls with the selection of White Song. Hopefully I have the translation right.

Here is an encore presentation of a selection from a few years ago. Raimonds Pauls is one of my favorite musicians and wrote many movie scores.

You may prefer to watch this in full screen.

It’s Sunday and how about sitting it out for awhile and listening to some Blues? Add some super photography and it’s a super chill pill. The description says  “Traditional electric blues quartet from Milan – Italy, characterized by an essential and caustic sound with a strong emotional impact.”  I’ll let you decide. This is quite a bit different than my usual Sunday fare.

Be sure and watch it in full screen.