The truth of our oil reserves going abroad has been going on since 2021. I have been posting about it since forever. The media must be giving up on Biden to finally give the great reveal.

Here is a flashback and roundup of our shipping out our oil reserves that I posted in April 19, 2022.

And of course our gal previously from Moveon.Org doesn’t know one thing about it.

The first time Biden released our oil reserve last fall it made its way to Asia. Now we learn that this batch is headed to..drum roll please… Europe. These releases were suppose to bring the price of oil down here. Forget that the purpose of the oil reserve was for emergencies. Just where does the money received from these sales go Mr. Joe? Just thought I would ask. It is being sold as reducing our cost. First the update and then a trip down memory lane:

Joe Biden’s decision to release 180 million barrels of oil from the US Strategic Petroleum Reserve – one million barrels per day for 180 days, ending just before the midterm elections which the Democrats will lose in an avalanche – was meant to help lower US gasoline prices “because Putin price hike.” Instead, it is heading for Europe.

According to Bloomberg, citing a person familiar with the matter, the Suezmax ship Advantage Spring – sailing for Rotterdam, according to ship-tracking data compiled by Bloomberg – received emergency SPR sweet crude from Energy Transfer’s Nederland oil facility around April 1 for export. 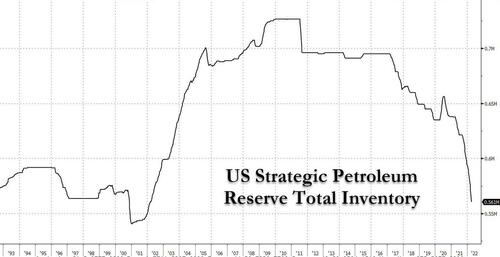 Trump filled it up before he left office and confirmed it. Turns out Biden is shipping our reserves to Asia!

“Based on the price of oil, I’ve also instructed the Secretary of Energy to purchase… large quantities of crude oil for storage in the US strategic reserve. We are going to fill it right up to the top. It puts us in a position that’s very strong, and we are buying it at the right price”, Trump said.

Everyone is talking about opening the tap. Namely one Chuck Schumer. Let’s follow the bread crumbs for the surprise ending. Here is the give away!

Here is the craziness:

Yesterday the acting head of the EIA said that any release from the US strategic petroleum reserve (SPR) would have only short-lived impact on oil markets.

It even gets more interesting- in a previous post:

According to a person familiar with the matter, the US has asked China to release oil reserves to help stabilize soaring international crude oil prices.

The issue was also broached during a phone conversation between Chinese foreign minister Wang Yi and US Secretary of State Antony Blinken two days earlier.“One of the pressing issues for both sides is energy supply,” the person said, which made us wonder just what China would want to give up some of that ‘supply’ for to help out its arch-competitor on the global hegemon stage?

Now why would that be? And where did our strategic oil go?
How large is the US strategic oil reserve?
The Strategic Petroleum Reserve (SPR) is a supply of petroleum held by the United States Department of Energy (DOE) for emergency fuel. It is the largest emergency supply in the world, and its underground tanks in Louisiana and Texas have capacity for 714 million barrels (113,500,000 m3).
Here is a handy dandy interactive chart which will give you the monthly and yearly stats:

US Crude Oil in the Strategic Petroleum Reserve Stocks

The Strategic Petroleum Reserve is a U.S. Government complex of four sites with deep underground storage caverns created in salt domes along the Texas and Louisiana Gulf Coasts. It turns out that Biden is already tapping into the SPR; he’s just not doing it to help Americans.  A report in investment circles is finally trickling down into the mainstream news: Biden is selling massive amounts of SPR oil…to Asia!

(Bloomberg) — If the Biden Administration decides to tap U.S. emergency crude reserves to push down domestic energy prices, it may not help all that much. The supplies may just be exported away like last month.

About 1.6 million barrels of crude from the U.S. Strategic Petroleum Reserve — a monthly record — was shipped out in October, according to data from market intelligence firm Kpler.

All three supertankers went to Asia.

“Given the ongoing pace of the current SPR release — 12 million barrels in the last two months and the biggest weekly release so far last week at 3.1 million barrels — it’s fair to assume more SPR barrels are going to leave U.S. shores in the weeks ahead,” said Matt Smith, an oil analyst at Kpler.

As far as I can tell, the administration has not explained why, with Americans struggling to keep up with rising fuel prices, it’s shipping our SPR to Asia.  During the virtual meeting between Biden and Xi Jinping, the two men allegedly discussed releasing oil from both countries’ petroleum reserves but made no mention of the sales to Asia that already took place.

It’s becoming clearer daily that there is a clown in the White House, but it’s not a cute, loving clown like Bozo (although I always found him kind of creepy).  Instead, we’re being led by the political equivalent of the Joker from the D.C. Comics, a mad man who wants to burn it all down.

Bonus: Liar liar pants on fire. Does he even know the reserves are being released?

Nov 6, 2021 — President Joe Biden on Saturday was noncommittal on ordering a Strategic Petroleum Reserve release in an attempt to address rising crude oil …

That my friends is one of the biggest days in swamp land. Go figure this one out.

« European Union Fires the shot to start WWIII in the Netherlands
U.S exports 74% of U.S. Liquefied Natural Gas to Europe »
%d bloggers like this: