Biden’s Marxist lackeys keep rolling along. This time it’s Secretary of Energy Granholm. China emissions have tripled over the last 30 years and are on the rise while ours are going down. How embarrassing is that, flat out lying in order to try and pass an agenda so dangerous? And to liken ourselves with Communists via a carbon footprint? This is setting the stage for dissing America at the forth coming Climate summit.

This is looking up to be one grand Socialists party.

Yes, The U.S. Leads All Countries In Reducing Carbon Emissions.

According to the 2017 BP Statistical Review of World Energy, since 2005 annual U.S. carbon dioxide emissions have declined by 758 million metric tons. That is by far the largest decline of any country in the world over that timespan and is nearly as large as the 770 million metric ton decline for the entire European Union.

Let’s keep in mind what Yellin has in mind for this little get-together. 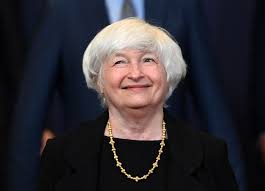 And it’s all hands on deck in destroying life as we know it. Let’s pump up inflation even more since everything is going so swell in the world. As if corporations will not simply raise prices to cover taxes.

Who else besides us will be paying this and how much more will this Administration & its minions (Yellin) be allowed to do to undermine our economy & future?

WASHINGTON, Sept 28 (Reuters) – U.S. Treasury Secretary Janet Yellen said on Tuesday she is looking for G20 countries to reach political agreement on a global minimum corporate tax deal at their summit in October and has not ruled out a rate higher than 15%.

Yellen, speaking to the National Association for Business Economics, said the Senate Finance Committee is looking at a “slightly higher” overseas minimum corporate tax rate than the 16.5% passed by the House of Representatives Ways and Means Committee.

“We’ll see where it all shakes out, but my hope is that when reconciliation (legislation) passes, we will come into compliance with this regime, and we’re looking for political agreement to be achieved at the G20 summit at the end of October, and then countries will quickly put this into place,” Yellen said.

Some 134 countries agreed over the summer to support a global minimum tax of at least 15%, but low-tax Ireland has held off on endorsing the deal as it waits to see if the U.S. Congress accepts the Biden administration’s proposed tax increases on corporations and wealthy Americans. read more

Back to our gal Granholm:

Granholm’s comments come one month before the UN Climate Summit in Glasgow, where the Biden administration plans to flood the zone with 13 high level cabinet members and officials to meet with other world leaders on creating more commitments to limit global warming, while emphasizing what the US is doing to lower its own greenhouse gas emissions.

Just embarrassing. She is saying this to peddle the Green New Deal.

Secretary of Energy Jennifer Granholm has sparked a furor by saying the US doesn’t “have much moral authority” to criticize China over its energy policies.

“You know, we’ve got a global problem and China is a big contributor to that — we are, too,” Granholm said. “And we don’t have much moral authority to say you should be doing this if we are not taking action and deploying the technology that we need to deploy.”

Biden will also swing by the Pope to get a pump on this Carbon nonsense.

WASHINGTON — (AP) — President Joe Biden is set to meet Pope Francis when he visits the Vatican later this month as part of a five-day swing through Italy and the U.K. for global economic and climate change meetings.

Biden plans to discuss the coronavirus pandemic, the climate crisis and poverty during his meeting with the pope, according to the White House. The meeting will take place on Oct. 29, and Biden will then attend a two-day summit of G-20 leaders in Rome, before heading to Glasgow, Scotland for the U.N. climate conference known as COP26.

I can only imagine the spectacle of Biden at the two day summit.

Bonus preview: Kerry will pitch in.

Meanwhile Joe is trying to figure out whats going on. Paging Nurse Jill. Cannot wait to see him in action at the Summit.

For the best of the swamp push the button

« Secretary Buttigieg – The problem? – It is our ‘demand’, We want stuff
Biden Raises Reminder of Infamous Dodd – Kennedy Sexual Assault »
Loading Comments...
%d bloggers like this: