Just what is Critical Race Theory?

Does this academic theory (now more than 40 years old) admonish white people as oppressors of non-white people?  Does it classify all black people as hopelessly oppressed victims?  Or are these claims exaggerations made by people who don’t understand the basic tenets of the argument?

Actually, the theory addresses institutions rather than groups of people.  It asks the question, “How do laws, policies, and procedures embedded within our social system impact outcomes among people with different skin colors?”  The theory suggests that racism can exist in society without racists.  The problem is that most people cannot separate their identity from the social institutions that determine how we live our lives.

Of course, the debate warms up when some people confuse equal opportunity with equitable outcomes.  Remember, America is now and has always been a complex society, so it is not only possible but highly likely that people with an agenda seek to over-simplify that which they do not understand.

Calm debaters do not suggest that we today are somehow responsible for our often sordid racialist past; they say that we today have a responsibility to address racism as it continues to exist within our institutions — that is, American institutions.

For most of us, it is easy to understand why parents are upset with this dramatic turn in “sexual education.” but it might also be that the timing of this issue couldn’t be worse.  It arrived on our doorstep almost at the same time muddle-headed teachers took upon themselves the responsibility for explaining to their six-year-old students the psychological complexities associated with gender-confused persons.  Many parents strenuously object to the inexplicable behavior of some teachers in forcing this subject down the throats of their six-year-old captive innocents. 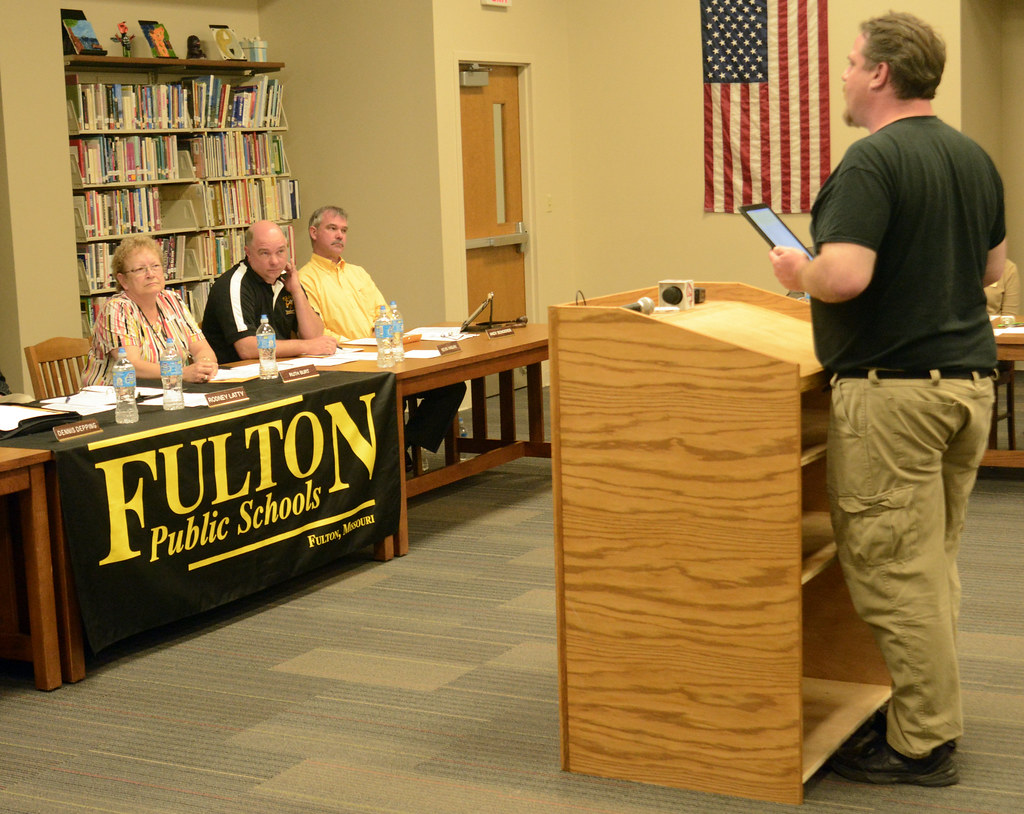 “Fulton parents confront school board about controversial survey” by KOMUnews is licensed under CC BY 2.0

But now, to continue our examination of critical race theory, we must add to whacky (abusive) classroom behavior the fact that teachers have taken it upon themselves to explain to 6-7-year-old innocents all about critical race theory — couching in terms of white oppression against colored people.  The problem here begins with the fact that most of these teachers are themselves incompetent to address the subject, exacerbated by another fact: they lack a sense of decency in offering the issue to little children in the first place.

As a result,  teachers have made the “theory” a reality by telling little white Samantha that she’s somehow oppressed little black Julia — and, in the telling of it, made both little girls cry and changed their relationship forever.  Samantha and Julia may have become life-long friends, but not after their teacher “opened their eyes” to the teacher’s reality.

There may be a few arguments within critical race theory that warrant a conversation — not shouting but talking in a calm voice.  For example, if one argues that our justice system treats people of color differently than white people, where is the evidence for such a proposition?  Do we rely on the evidence of raw numbers of colored people incarcerated every year or a percentage of our general population, or shall we consider the numbers of coloreds within the nation’s population of coloreds?

Of course, we don’t know how many of those charged black adults had a rap sheet equal in size to the Chicago telephone directory, but the numbers seem startling. One study, the so-called sentencing project (2017), claimed that black adults were 5.9 times more likely to experience incarceration than white adults for the same crime. But the argument continued: one of every three black boys born in 2001 could expect to go to jail in his lifetime.

This independent report (submitted to the United Nations Special Rapporteur on Contemporary Forms of Racism, Racial Discrimination, Xenophobia, and Related Intolerance) claimed that the United States operates “two distinct justice systems: one for wealthy white people, and another for poor people and people of color.”

“The double standards are not, of course, explicit; on the face of it, the criminal law is color blind and class blind.  But in a sense, this only makes the problem worse.  The rhetoric of the criminal justice system sends the message that our society carefully protects everyone’s constitutional rights, but in practice, the rules assure that law enforcement prerogatives will generally prevail over the rights of minorities and the poor.

By affording criminal aspects substantial constitutional rights, in theory, the Supreme Court validates the results of the criminal justice system as fair.  That formal fairness obscures the systemic concerns that ought to be raised by the fact that the prison population is overwhelmingly poor and disproportionately black.”

Please comment (below) if you have any idea what Mr. Cole is trying to say.

Here are a few facts offered by the Brookings Institute:

So, if critical race theory argues that American institutions are stacked against the interests of colored people, how do proponents of the theory explain the preceding gains among people of color?  What is missing in the argument, particularly that addressed by Mr. Cole, is this: if blacks feel oppressed, it is likely the result of poor decisions they made for themselves beginning around their late adolescent years.  They decided not to graduate from publicly funded schools, they chose to associate with criminal elements, and they chose to disfigure themselves with tattoos and piercings.

Relevant statistics (and facts) tend to refute Critical Race Theory.  No white person forces a black thug to kill another black thug.  Suppose the concern of CRT theorists is, in fact, institutional racism (rather than individual racism). What should a lucid person expect from our courts if an accused colored man, with a rap sheet a mile long, is proven guilty of a serious felony?  Should that person go (back) to jail, or is it more “equitable” to make him (or her) write an essay?

We must exercise caution here: the United Nations Special Rapporteur on Contemporary Forms of Racism, Racial Discrimination, Xenophobia, and Related Intolerance might determine that having an illiterate person write an essay is a form of cruel and unusual punishment — and then what?  Of course, there probably are sentencing disparities between colored and white felons, and in the same way and reasons for sentencing disparities between male and female felons.  The differences, I suspect, involve such contributing factors as prior crimes and recidivism.

My conclusion is that if we are going to have a conversation about Critical Race Theory, then we should base that discussion on a complete examination of all our institutions.  My research suggests that while our various societies aren’t perfect, there is no evidence to suggest institutional racialism.  There is also no evidence to suggest that white people wake up in the morning with fresh ideas on how to oppress their colored neighbors or co-workers.  Do some people harbor racist views?  Sure.  Blacks, whites, Hispanics, and Asians all do that.  So what?

[1] Because the American media never report on these factors, most blacks continue to view themselves as part of the American underclass and, along with mainstream society (similarly misinformed), continue to imagine that most blacks rely on crime and welfare checks as the primary source of their income.  Blacks are more prone than whites to exaggerate the extent to which black Americans are “trapped” in inner-city poverty.  In a 1991 Gallup poll, 20% of all whites and 50% of all blacks claimed that three out of four blacks lived in impoverished urban housing projects.  It wasn’t true in 1991, and it isn’t true today, either.  In fact, the black middle class outnumbers disadvantaged blacks by a significant margin.

This is the second part of Mustang’s previous post on Critical Race Theory. For the first part please click on the link below:

The best of the swamp today