Why Do Americans Celebrate Labor Day?

Even though the seed to recognize “Labor Day” was only first planted in 1882, the history of this holiday is already mired in myth and controversy.  The descendants of two men with similar last names argue that it was their great-grandfather who came up with the idea. 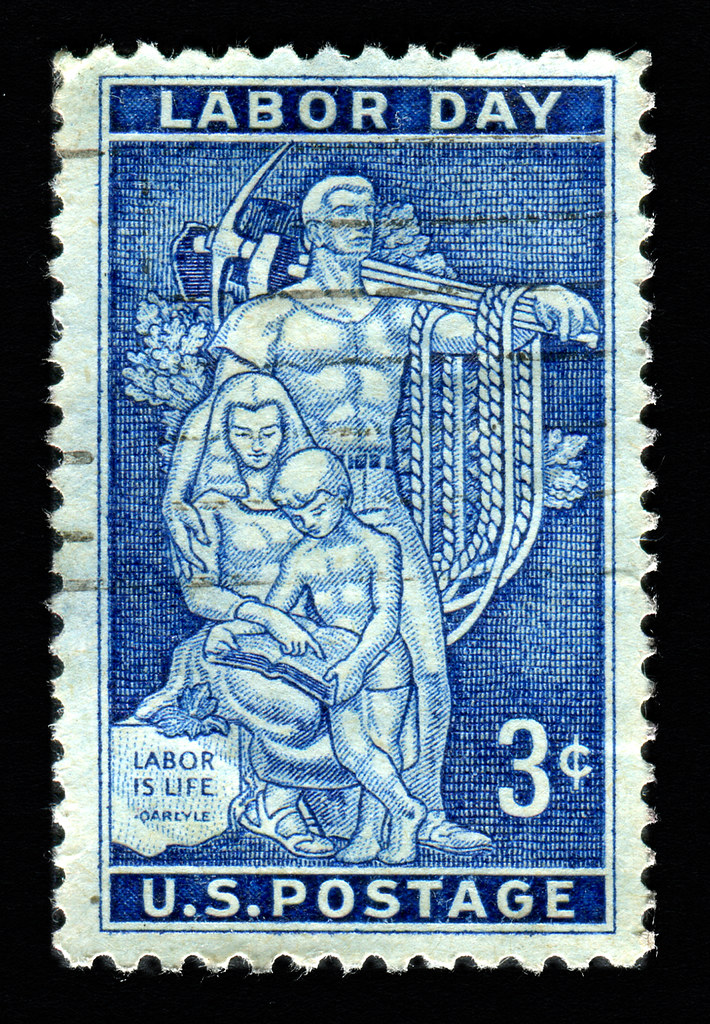 “United States stamp: Labor Day” by karen horton is licensed under CC BY 2.0

One story is that at an assembly of the Knights of Labor (KOL) in New York City, Matthew Maguire urged the establishment of a national holiday to recognize the contributions of men whose labor made American industries successful.

The second claim is that Peter J. McGuire, a vice president for the American Federation of Labor (AFL) made the proposal after viewing a similar celebration in Toronto, Canada.  Both accounts took place in 1882.  Both men thought that a day set aside between Independence Day and Thanksgiving would be an ideal time to have such an event.

Now if true, then both men were clever enough to avoid celebrating Labor Day on 1 May, since “May Day” was the date chosen by European socialists and communists of the Second International to celebrate International Worker’s Day — joined, of course, by anarchists, fascists, and labor activists seeking recognition.

In fairness, neither Matthew, Peter, nor any European labor activist could have imagined the long-term effects of Marxism in 1882.  On paper, the ideologies proposed by Karl Marx and Frederick Engels does seem enlightened; in its application, however, Marxism became an entirely different animal.

In any case, the notion of setting aside one day out of the year to recognize the contributions of American labor seemed innocuous and who doesn’t want a day off from work with pay, a parade, a picnic — even if you have to listen to men give political speeches?

So, the labor unions had their first parade in the United States on 5 September 1882 and a good time was had by all.   Interest in Labor Day spread across the United States.  In 1887, Oregon became the first state to designate Labor Day as an official holiday, and by 1894, thirty additional states made similar pronouncements.  In 1894, Congress passed a bill designating Labor Day as a federal holiday on the first Monday in September.  The bill became law over the signature of President Grover Cleveland (Democrat) on 28 June.  Of course, the law only applied to federal employees, so when other states failed to recognize Labor Day, unions began organizing strikes and work stoppages on that day.

In 1909, the AFL convention earmarked the Sunday preceding Labor Day as “Labor Sunday.”  The AFL wanted to dedicate a day to the spiritual and educational aspects of the American labor movement.  Labor Sunday never quite caught on, however.  Most people in 1909 didn’t appreciate having their religion politicized.

Today, Labor Day marks the official end of summer and the official start of football season, where young men who earn a skillion dollars a day playing a game begin “taking a knee” in protest of their unhappy circumstances in America as black people.

Every American likes having a long weekend, but not every American appreciates celebrating communism — particularly given the direction of the US government since the presidency of Barack Obama.  Culturalist Matt Barber (an attorney and blogger at BarbWire.com) reminded us about the relationship between Marxism/Socialism and Labor Day in 2016:

“How about some Commie ketchup on that burger?  It’s extra red.  A little Marxist mustard for your dog?  What about a pinch of socialist sauerkraut on the bubbling bratwurst?

“I know, I’m a killjoy, and, call me a hypocrite, but I’m grilling out Monday anyway.  Still, fellas, while you’re sweating over that sizzling Weber this three-day weekend, just be sure to tip a stein to old Karl [Marx], Vladimir [Lenin], and Josef [Stalin].  Without those genocidal schmendricks, you’d be stuck in your cubical Monday, just like every other day, playing Candy Crush and checking fantasy football […]

“Actually … hard work has nothing to do with it.  Labor Day is about “labor,” and “labor,” since the 19th century at least, has been, and yet remains, one of the primary “progressive” euphemisms exploited by leftists (aka, Democrats) to further the redistributionist goals of the global socialist movement.”

Wow.  And I thought I was a hard ass.  But, he does have a point.  I’m certainly not advocating that we curtail a long weekend … only that we stop to consider what the US government has contrived to do to laborers in this country.  We no longer produce anything in America.  Most of our industrial laborers are now involved in manicuring the lawns of wealthy bankers or opening car washes where you end up doing most of the work yourself.  With people on your side like the Congress, who needs enemies?

In any case, Mr. Barber concluded with:

“And so, as we enjoy friends, family, food, and fun this extended Labor Day weekend, let’s heed the advice of Marxist.com and remember that this particular holiday — this workers’ paradise for a day — was ‘conceived of and celebrated by socialists and militants within the labor movement.’

“A socialist movement, mind you, that thrives from within the freest nation on earth (for now at least) — a nation made great, in large part, by the very capitalism unions, and the Democrats they fund, so hate, and desperately seek to destroy.”

Something to remember and think about.  While the United States sent its young men and women into harm’s way to fight communism (1950-1975), while young Americans were dying from communist bullets and shrapnel, as mothers and wives cried, Americans back home were celebrating communism and socialism on the first Monday of September.  It’s hard to imagine that our nation could be so obtuse.