This is LITERALLY a headline from the U.S. Dept of Defense website. It reads like a Buzzfeed or Twitchy headline. So leads Weasel Zippers headline. I am glad we can “smite” something even if its justTucker Carlson. Don’t comment about the Biden administration or its policies. Got it?

There has been quite a kerfuffle over Tucker Carlson’s program which I covered.

Joe Biden and his China strategy – feminize the U.S. military

Tucker Carlson accuses Joe Biden of trying to feminize the military, argues China is ramping up it's military masculinity. pic.twitter.com/8lDKEPyws6

With that the Pentagon strikes back with this: 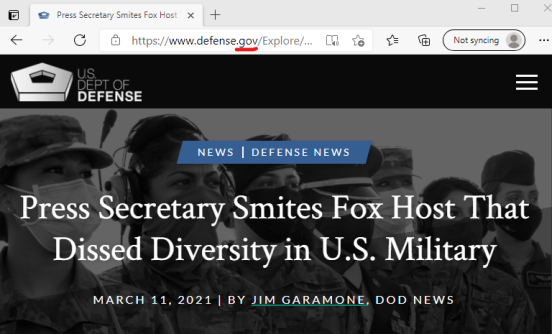 The United States military is the greatest the world has ever seen because of its diversity, Pentagon Press Secretary John F. Kirby said during a news briefing this morning.

Kirby addressed this because a Fox cable show host used his show to denigrate the contributions of women in the military and to say the Chinese military is catching up to the U.S. military because it does not allow women to serve in the percentage the United States does.

Kirby addressed the insults to the entire U.S. military straight on. “I want to be very clear right up front, that the diversity of our military is one of our greatest strengths,” he said. “I’ve seen it for myself in long months at sea and in the combat waged by our troops in Iraq and Afghanistan. I’ve seen it up on Capitol Hill just this past month. And I see it every day here right at the Pentagon.”

“To be sure, we still have a lot of work to do to make our military more inclusive, more respectful of everyone, especially women,” Kirby said.

There is a lack of women at senior ranks, Kirby said. “We pledge to do better, and we will,” he said. “What we absolutely won’t do is take personnel advice from a talk show host or the Chinese military. Maybe those folks feel like they have something to prove — that’s on them. We know we’re the greatest military in the world today and even for all the things we need to improve, we know exactly why that’s so.”

I am sure all the tranny’s that now will be able to have their surgeries thanks to the U.S. taxpayer will fill out our military to its finest level.