What is being proposed is the end of the specie. No babies. Enough humans on the planet.

The first move was killing the unborn until the time of birth. Seems to be working and gaining speed. Now, keep your eyes open, eugenics is the next move. It must be stopped.

Not enough to pack the Supremes. End the Electoral College. Voting age to 16. Millions across our border. The rabid left will now start on Eugenics. Oh, this will be in the guise of “saving the planet” but we know the real reason. Gruber, architect of Obamacare told us. It was to get rid of the undesirables. 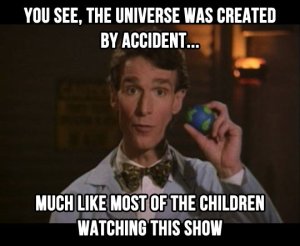 Bill Nye has a B.S. in Mechanical Engineering. Period. That is it. But this will be the new indoctrination for us and here is when it began.

The 13th and final installment is titled “Earth’s People Problem,” and with a name like that, you know we could be in for some ideas that border on eugenics.

The 26-minute episode starts off in fairly inoffensive fashion. Following an intro that demonstrates how human consumption is like sponges soaking up water, Nye explains how women who have access to educational and professional opportunities tend to have fewer children.

The fight against climate change, Nye’s most passionate cause, is brought up by Rieder, who notes that children in developed countries use 160 times more resources than children in the developing world. This is where the creepy totalitarianism of the environmental movement starts to show itself. Nye asks, bluntly, “Should we have policies that penalize people for having extra kids in the developed world?”

And let us not forget Gruber, the architect of Obamacare-

Embattled MIT professor Jonathan Gruber has not only gotten in trouble for bragging about helping President Obama put one over on the American people with Obamacare, he’s also been uncovered as an abortion advocate—but not a run-of-the-mill advocate of “women’s rights.”

No, Gruber’s abortion advocacy is of a particularly pungent eugenics variety. He’s on record repeatedly making the case from social science that abortion is a “social good” because it reduces the number of “marginal children,” by which he means urban poor—those he says can be counted on to commit crimes if they were ever born.

Gruber co-authored a paper during the Clinton years which argued that legal abortion had saved the U.S. taxpayer upwards of $14 billion in welfare benefits and that it also lowered crime.

Get ready for the old days-