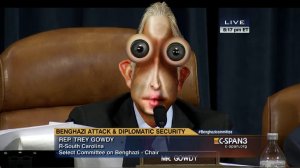 Now we have found Brutus? The House Oversight Committee has launched an investigation into the scandal involving former White House Staff Secretary Rob Porter, committee chairman … Elijah Cummings (D-Md.), the committee’s ranking member, called for a review of the security clearance process in a letter to Gowdy the day after .. so goes the headline….

I have added an interview Gowdy did with CNN. Why does Gowdy feel the need to go after a pick of Trump? Mr. Purity -what do they have on you?

Uranium One Informant spills the beans yesterday to congress, no recording taken

posted onF ebruary 8, 2018 never made the light of day. Three committees met jointly for the great reveal –the committees could not agree on the recording. Thus no record or recording of any sort taken. Which Committee was the Judas? Looks like now it we need to put the Oversight Committee in our scope. Why would a Committee chaired by the GOP go after Trump? I ask you? The same one which was at the Uranium One Committee and denied a recording?

Guess who is chair of the Committee and the members? Guess who is retiring? The likely suspects?

I will let you connect the dots….. Gowdy has been on Trump’s tail and throwing him under the bus all week, why?

P.S. On a personal note, starting to feel a bit better, thanks for the well wishes!

« Sunday Respite – All in the Family
IRS, DOJ Subpoenas go after Jared Kushner – price of not draining the swamp »
%d bloggers like this: