Don’t you love these sanctimonious tweeps who feed at the trough? The new thing is you just have your wife scurry about Congress and other governmental agencies in the role as a “lobbyist” and guess what happens? A little “something” finds its way into a bill. One of the most egregious is Congressman’s Mike Rodgers wife, In case you missed it and why the Benghazi hearing never got anywhere. Rodgers faux Benghazi report and his wife’s Defense interests But let me not get ahead of myself. Let’s look at Durbin.

Flashback to The Chicago Tribune . It appears Senator Dick Durbin’s wife is a lobbyist . It appears Dick Durbin voted on the Department of Education budget which had money that wound up with Eastern Illinois University.

Loretta Durbin, the wife of Sen. Dick Durbin, began lobbying in 1998. The following list at the link below includes her clients since 2000, the earliest year for which state lobbying disclosure records are available online. Her Springfield-based firms have lobbied the governor’s office, the General Assembly and state agencies for its clients, but she said she does not lobby at the federal level to avoid conflicts of interest with her husband. 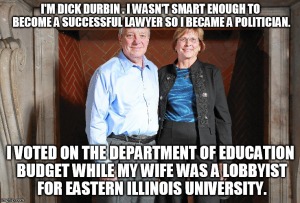