Gasoline Taxes at the pump by State.

Here is a graph to make for a happy Friday. Great PDF file link below. Click picture to enlarge if it does not fit your page. 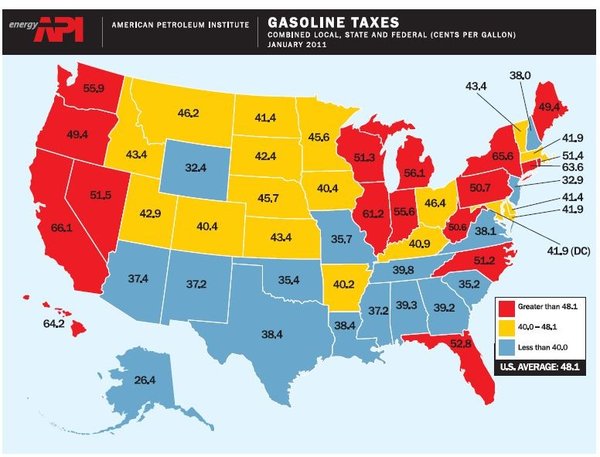 The American Petroleum Institute, an industry trade group, calculated how much Americans were paying (.pdf file) per gallon in local, state and federal taxes as of January 2011, and the difference by state is substantial. Life Inc

This reminded me of an earlier story I did: Hud offers Millions in grants to remove lead based paint.   HUD says its mission is to “create strong, sustainable, inclusive communities and quality affordable homes for all.” Now that is a mission!! Looks like they have found a way to recoup some of their grants. We of course, pay for this in the pricing for our work we have done. Just take a look at these regs: http://www.epa.gov/lead/pubs/renovation.htm

A Milford, Conn. company has agreed to pay $30,702 to settle claims by EPA that it failed to provide lead hazard information to home owners or occupants before doing renovations that may have disturbed surfaces coated with lead-based paint.

The settlement resolves claims made by EPA’s New England office that Permanent Siding and Windows, a contractor specializing in spray-on vinyl siding and replacing windows and doors, failed to provide EPA’s lead hazard information pamphlet to at least 17 owners or occupants before the company began renovation activities. This pamphlet is required by the federal Pre-Renovation Rule and helps educate home owners or occupants on how to minimize their exposure to hazardous lead dust that is often generated during sanding, cutting, demolition or other renovation activities. The pamphlet also provides resources for more information about lead. The violations in this case took place during renovation work done between January 2006 and March 2009.  H/T: Motor City Times 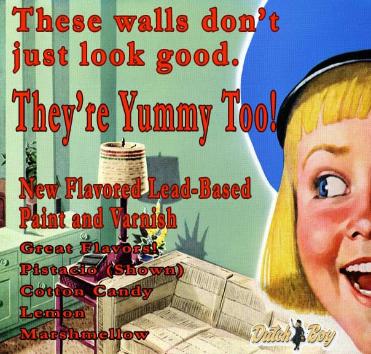 We continue to hear stories of the ‘Misunderstood” Muslims. How we must be tolerant. We must have “educational’ moments so we can appreciate the plight of the poor muslim. At the same time Christians are being pushed out of Bethlehem. The birth place of Jesus. Here is an example from the United Church of Christ which purports to have a  robust “Social Justice” outreach:

St. Peter’s United Church of Christ in Carmel is teaching the community about Islam during a special program Saturday at the church, 3106 E. Carmel Drive.

A light dinner and special recipes from countries with large Islamic populations will be served beginning at 5:30 p.m. Indy Star

Meanwhile, Christians are being persecuted world-wide:

The Muslim Fatah-controlled authority in Judea and Samaria is encouraging a “sharp demographic shift” in Bethlehem, where the Christian population went from a 60 percent majority in 1990 to a 40 percent minority in 2000, to about 15 percent of the city’s total population today.

It is estimated that, for the past seven years, more than one thousand Christians have been emigrating from the Bethlehem area annually and that only 10,000 to 13,000 Christians remain in the city. International human rights lawyer Justus Reid Weiner, who teaches at Hebrew University, told the Jerusalem Institute for Global Jewish Affairs that, under the PA-Fatah regime, Christian Arabs have been victims of frequent human rights abuses by Muslims.

As people with “dhimmi” status, Christians living in Palestinian-controlled territories are not treated as the equals of Muslims. He says: “They are subjected to debilitating legal, political, cultural, and religious restrictions This has become a critical problem for the Palestinian Christians in the West Bank and Gaza. Muslim groups like Hamas and Islamic Jihad have built a culture of hatred upon the age-old foundations of Islamic society. Moreover, the PA has adopted Islamic law into its draft constitution.”

In 2006, Hassan El-Masalmeh, a member of the Bethlehem City Council and local Hamas leader, publicly advocated implementing a discriminatory tax on non-Muslim residents. In late 2007 an evangelical pastor was forced to leave Ramallah under threats from Fatah gunmen, and soon after, his congregation dispersed. More at Mark Levin

That this person is even being considered to head up one of the most important agencies in government, indicate the insidiousness of this administration. Yes, once they get there greedy grasping hands on our FBI, oh what a field day they will have. Here is one of the best parts:

Basically, the Gorelick memo set in stone the Clinton-era doctrine that terrorism was to be regarded as a criminal justice problem. That meant information developed by intelligence agencies was not to be shared with criminal investigative units, including the Department of Justice, largely because the regulations under which intelligence agencies operate did not necessarily protect the civil rights of criminal suspects under U.S. law.

There are reports that President Obama is considering former Clinton administration official Jamie Gorelick as a possible candidate to be the next chief of the FBI, and critics are erupting with horror at the idea of a person in that position who, as one alleged, “helped to bring us 9/11 and the collapse of Fannie Mae and Freddie Mac.”

But if the White House seriously is considering such an appointment, surely discussed as part of the vetting process will be her controversial role as a deputy attorney general under Clinton in not preventing the 9/11 tragedy as well as her role under Clinton as a vice chair at Fannie Mae when the mortgage giant developed catastrophic problems.

The Wall Street Journal reported Sept. 25, 2008, that Gorelick, while yet an executive at Fannie Mae, received from Countrywide Financial Corp. a favor from Countrywide’s then-CEO Angelo Mozilo, a “friend of Angelo” refinancing. The favor, in 2003, reportedly was favorable interest for a 10-year, 5 percent fixed-rate deal on a $960,149 mortgage owned by Gorelick

In 1998, as Fannie Mae vice chairman, Gorelick received a bonus of $779,625, despite her alleged involvement in a scandal in which Fannie Mae employees falsified signatures on accounting transactions in order to manipulate Fannie Mae books to meet 1998 earning targets. The manipulations allegedly triggered multi-million dollar bonuses for top executives, including Gorelick.
Read more: Candidate for FBI post has history in scandalsWDN

“Where is the resistance? If you are watching this video, you are the resistance.  The majority has checked out, they don’t care, and liberty breathes it’s last gasp. – SGTReport

Please feel free to send this video far and wide as we must wake up more Americans to the impending financial tsunami.  We will be the ones that everyone depends on when it comes ashore.