While the world is on fire: Obama Fills out His NCAA March Madness Bracket

This boy-king is clueless…

Okay, that’s not all he’s doing. “Obama will tape interviews from the Map Room with KOAT Albuquerque, KDKA Pittsburgh and WVEC Hampton Roads on education reform and the need to fix No Child Left Behind.” More at National Review 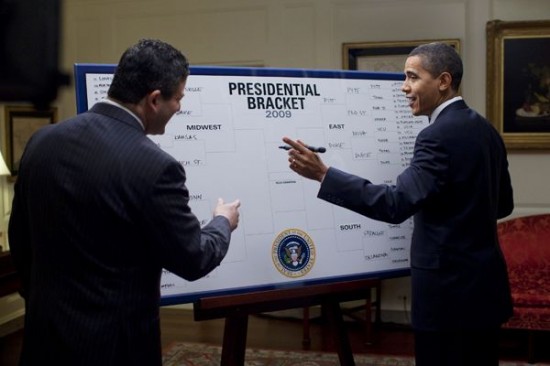 Dangerous levels of radiation leaking from a crippled nuclear plant forced Japan to order 140,000 people to seal themselves indoors Tuesday after an explosion and a fire dramatically escalated the crisis spawned by a deadly tsunami.

In a nationally televised statement, Prime Minister Naoto Kan said radiation had spread from the four stricken reactors of the Fukushima Dai-ichi nuclear plant along Japan’s northeastern coast. The region was shattered by Friday’s 9.0-magnitude earthquake and the ensuing tsunami that is believed to have killed more than 10,000 people, plunged millions into misery and pummeled the world’s third-largest economy.

Via Mike Allen’s newsletter, we see in the first line how the leader of the free world will spend his day during this awful crisis:

President Obama is taping his NCAA picks today, and they’ll be revealed tomorrow on ESPN.

Japan faces an almost unparalleled crisis, Libya is in civil war, and we’re having another budget showdown after running up a $222.5 billion deficit in the 28 days of February. And after last week’s bullying summit, Obama is spending this week talking education reform.

4 Responses to “While the world is on fire: Obama Fills out His NCAA March Madness Bracket”