UPDATE: Huffington’s Investigative News Network may be cause for AOL purchase? Huffington Post AOL Deal– Does George Soros money come with it?

Slowly, we are learning more about the merger of Comcast and NBC. Not that NBC could carry George Soros’s water any more than they do, but it is stunning that there is no shame. Of course the next step will be to throttle Fox News. In my opinion, they already have made good strides in that direction. Here tis:

Under the terms of the FCC order approving Comcast’s takeover of NBCU, at least half of NBC’s 10 O&Os have to find a nonprofit news center with which to work within the next year. The order cites the KNSD-VoiceOfSanDiego.org alliance as the model for what it would like to see in other NBC markets.

Proponents of the growing nonprofit news movement are hoping that NBC’s FCC-mandated efforts will bear fruit and encourage other commercial TV stations to seek out nonprofit partners.

There’s just one problem with this: Voice of San Diego is a member of INN (Investigative News Network) which is funded by the Open Society Institute, the URL of which is “www.soros.org.” Yes, these “non-profit” journalism centers are funded by George Soros. Full Story at Big Journalism 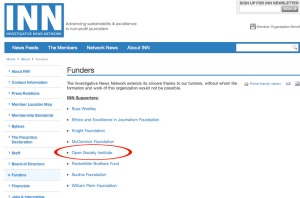 NBCU will strive to ensure the presentation of diverse viewpoints by seeking the expanded participation of minorities on its news and public affairs programming,” the companies promised in writing to black leaders. “To advance this goal, NBCU will consider suggestions from the African American Advisory Council of individuals who could be considered for such participation.”

“In addition, Comcast Cable is committed to launching a package o f 40-60 Spanish-language channels in all of its major Latino markets, with a balanced mix of programming serving all demographics and strongly promoting a diversity of Latino voices,” the companies promised in writing to Hispanic leaders. “Comcast Cable also will more than double its 600 hours of Latino VOD content, continue to add SAP-enabled offerings, and offer thousands of choices within a few years.”

The media giants also agreed to allow black leaders to have influence over NBC’s news programming. In addition to programming “diversity,” the Comcast and NBC Universal Memorandums of Understanding with different race-specific civil rights groups promise “diversity” in company employment, in supplier and vendor procurement and in “philanthropy and community investment.”