This story has been  out there that it was in development, but it looks like it is closer than we thought. They are talking 2015. At only about $200,000 each, it looks like it’s a winner. I must say, it will take a bit of courage to lift off in this vehicle. A new guy toy. I wonder if we will ever be able to fly it around town. No doubt something like this for the public in the coming century.

The Transformer project, or TX, from DARPA has been moving forward in its development stages pretty steadily.The Transformer project is not about everyday vehicles changing into giant sentient robots with lasers, this is about a Humvee being able to travel on land and air. So basically, it’s the flying car that many have dreamed about, but with rockets or chain guns. 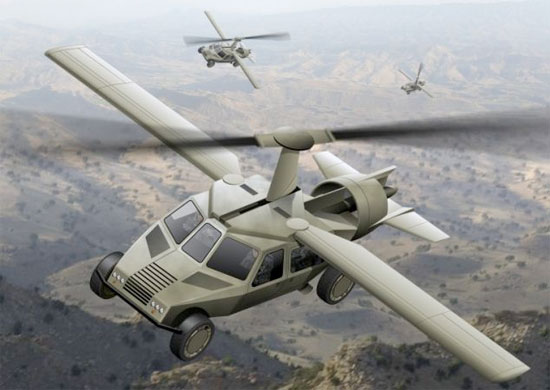 The Transformer project has a lot of different scenarios for usage. One of the more unique ones, though, is the ability for the Humvee to work as a medical transport, with the ability to fly out of a dangerous situation at the drop of a hat. That means wounded soldiers on the ground, as long as they are near the Transformer, won’t have to wait for an incoming helicopter to evacuate. 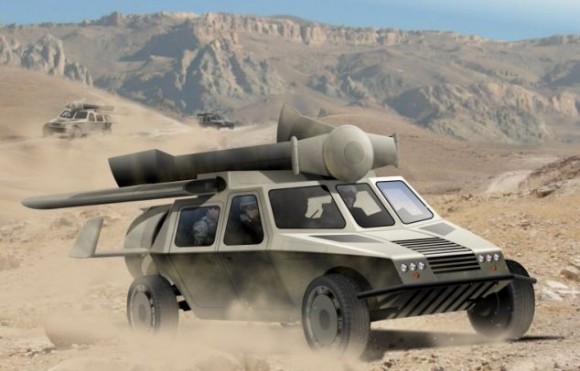 A few more details about the driving and flying vehicle have emerged as well. For example, the Transformer will be able to move at a speed of about 65 mph, while it’s driving around. However, while it’s in the air, it will be able to reach speeds of 150 mph. The design calls for lightweight anti-blast armor, as well as ballistic-proof windows installed throughout. And, as you can imagine, the Transformer will indeed be outfitted with heavy weapons for defense, as well as offensive maneuvers.

But, the real motivator for the Transformer to take shape, and actually find its way to the battlefield, is the supposed cost. According to DARPA, the Transformer will only cost around $203,000 to construct

For more info go to the originally Posted: The Tech Journal 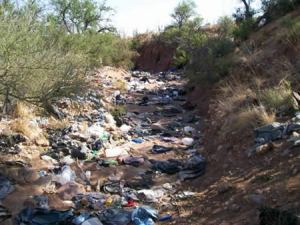 Let’s keep the good guys busy looking down and not across for the bad guys. Oh Janet, you are really getting to be too much! When does the hearing start on the DHS? Hurry, please.

If the Border Patrol isn’t defending the border, what are they doing down there besides providing free police services to invading colonists and getting shot by Mexican bandits? National Border Patrol Council Local 2544 reveals the answer — picking up trash:

Our newest information indicates that agents showed up for muster at Casa Grande station and were ordered to report to the Tohono O’odham district office at Federal Route 19 and Baboquivari Park Road. They were issued sticks with nails in them and told to pick up trash along the roadsides. This was presumably in preparation for a meeting with tribal leaders at the District office so that certain BP managers could ingratiate themselves to the tribal leaders. We are disgusted by these actions.

I had joined my brother several times in going to auctions of Federal Property confiscated or otherwise taken under “Forfeiture”. We would smile and joke about the loss of the Drug kingpin’s Mercedes and his other pleasures. In fairness, we would question the legality of this whole operation. It would go something like this,…”so the government can just come in an take the guy’s stuff? Something just doesn’t seem right about this”. This wasn’t stolen property. Just stuff they guy had. Then earlier, I wrote the post on Janet and the DHS Seizes electronic devices at the border and not returning them to the rightful owners. I started to thinking about those auctions and I started worrying, Is this what we are coming to? In this story, one could be a lawful citizen in the wrong place at the wrong time.

I caught this story from the Agitator which is spot on to my concerns:

..a former prosecutor described the Michigan forfeiture law to the Detroit News this way:

“It’s a money grab, pure and simple; a sneaky way of getting a penalty on something prosecutors can’t prove. It’s like shooting fish in a barrel.”

Earlier this month, police in Oakland County, Michigan raided a medical marijuana dispensary in the town of Oak Park. The deputies came in with guns drawn and bulletproof vests, with at least one wearing a mask.

They made no arrests, but they did clean the place out. The confiscated all of the dispensary’s cash on hand and—in a particularly thuggish touch—also took all of the cash from the wallets and purses of employees and patients. In this update, police officials say the raid was the result of street dealers telling police they were buying marijuana from the dispensary. I suppose we’ll see in time if that’s true, and if it is, if the dispensary was actually aware that it was selling to dealers. But at first blush, the claim sounds like a pretty good way for street dealers to put a legitimate competitor out of business.

Under Michigan’s asset forfeiture law, 80 percent of the cash the deputies seized will go directly to the Oakland County Sheriff’s Department. The other 20 percent goes to the local prosecutor. Medical marijuana is legal under Michigan law but is of course still illegal under federal law. And apparently there’s some debate about the legality of dispensaries. All of which means this particular dispensary will have a hard time proving it earned the seized cash legitimately. I doubt the patients and employees will get their cash back, either. The cost of challenging the seizure is likely several times more than the amount of money most people carry on their person.

“It’s a money grab, pure and simple; a sneaky way of getting a penalty on something prosecutors can’t prove. It’s like shooting fish in a barrel.”

Mark Levin Show :There was not much that was said on Mark Levin’s show last night about Governor Christie that was good. I must admit, it caused me to pause when he decided to drink the $400.00 bottle of wine at the White house with the Chinese. Maybe it was New Jersey first. If this information had come from another source, I would not be thinking much about it. This would be sad news if this is all true. Here tis a segment of his posting on his website.

On Thursday’s Mark Levin Show: Tom Marr of WCBM fills in for Mark. He talks about NJ Governor Chris Christie and how he is a RINO, and that the people in NJ did not get what they voted for. Tom gives a list of reasons why Chris Christie is not a conservative, including his decision not to join in with 26 other states against Obamacare. Why won’t he? Also, the Chinese leader is in America and receiving an extravagant reception from politicians, whom seem to conveniently forget that China is trying to surpass us economically and militarily.

New Jersey Gov. Chris Christie’s nomination of Sohail Mohammed to be a state judge shows the governor’s tin ear for radical Islam. Not only did he appoint a longtimemouthpiece for radical Islamists to be a judge, but Christie has also turned a blind eye to the activities of one of Mohammed’s clients – radical imam Mohammed Qatanani, head of one of New Jersey’s largest mosques.

Qatanani has a history of Hamas support and was related by marriage to a leading Hamas operative in the West Bank. This fall, Qatanani will return to a New Jersey immigration court, where the Department of Homeland Security is fighting to have him deported. In his initial application for a green card filed in 1999, government lawyers say Qatanani failed to disclose a conviction in an Israeli military court for being a Hamas member and providing support to the terrorist group.