Swiss voters came out strongly in favor of their right to bear arms Sunday, with a clear majority rejecting a plan by churches and women’s groups to tighten the Alpine nation’s liberal gun laws.

Official results showed more than half of Switzerland’s 26 cantons (states) voted against the proposal to ban army rifles from homes and impose new requirements for buying other guns.

“This is an important sign of confidence in our soldiers,” said Pius Segmueller, a lawmaker with the Christian People’s Party and former commander of the Vatican’s Swiss Guard. Washington Times

Opponents of an initiative aimed at restricting access to firearms say the proposal goes against Swiss values and makes false promises.

Looks like the Swiss are in for a big decision. The Americans will not be around the next time to bail them out. Think about it. Good luck with your nationwide vote in February.

Here is a link to a great Swiss slide show and Photos: Here

Representatives of four centre-right and rightwing parties told a news conference the initiative by a broad alliance of NGOs and centre-left parties was disempowering law-abiding citizens and members of the militia army.

They said existing measures to fight abuses are sufficient.

“The Swiss gun law is very strict; let us not create unnecessary new ones,” said Jakob Büchler of the Christian Democrats.

In a newspaper interview Defence Minister Ueli Maurer argued that women are more likely to approve the initiative because of an inability to handle firearms.

The initiative, which wants to ban army-issue firearms from households and set up a nationwide arms register, will go to a nationwide vote on February 13. 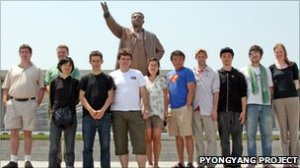 The naivety of youth. Unfortunately, it doesn’t end with youth. The progressives hold to the same naive view of the world. If they only get to know us, they will love us. If we take ourselves  back and live as we did in the 18th Century, perhaps then.

Can we not learn from History? Brown University.. have you not taught them History? Just a causal mention of some looking “malnourished”. There are millions starving. And when one of these ever so bright students gets accused of spying, and ends up  in prison for life as did the hikers in Iran. What then?  Here tis:

Amid the ongoing tensions between North Korea and the international community, a educational scheme created by two young men from the US is engaging directly with citizens and students inside the country. Organisers of the Pyongyang Project say their programme is breaking down barriers to the secretive state that government bodies cannot.

“The US and North Korea don’t have established relations, and talks are indirect at best. And what we believe is that there is a need for a grassroots level of engagement that we haven’t seen yet between citizens,” says Mr Reichel, a 23-year-old Brown University graduate. “We feel that education is the best ice-breaker.”

“They took us to the beach, we got our swimming trunks on and they basically said, ‘Go have a good time, you can talk to people’,” said Dave Fields, 27, a participant from the US state of Wisconsin.

He said that while many of those on the beach were malnourished in appearance, they were cheerful and receptive to speaking with foreigners, inviting them to sit with them on the beach and challenging students to jump off a diving board into the sea.

…   But the 26-year-old said she noticed what she described as a number of “red flags” throughout her visit.

At one point during a tour through a computer lab at Kim Il-sung University, students stared blank-faced into machines that were turned off, she said, adding that some rooms in the university even felt unused and smelled of fresh wood and paint.

“It definitely felt like there were props around the university. You get the feeling that it is sort of like a time capsule society – hair styles even that are kind of stuck in the 1960s.” Maybe they are catching on??

This is the latest in intimidation by our government. If you wonder why so many physicians have threatened to quit their practice, here is the number one reason. Bounty Hunters. Looking for a missing “bullet point” in the documentation or an inaccurate digit in the billing code.  Best part, no legal redress of any dispute. Guilty as charged. Here tis:

Medicare’s billing codes are a complicated, convoluted mess and deciphering them can sometimes be more art than science. Both Republicans and Democrats huff and puff against “waste, fraud and abuse” in Medicare. And they have already enacted Stasi-style laws such as the False Claims Act offering nurses, patients and other whistleblowers 15 percent to 30 percent of any money recovered if they report improper billing practices by providers.

It has created a new interagency task force called HEAT (Health Care Fraud Prevention and Enforcement Action Team) under which health-care officials will collaborate with the FBI to go after Medicare fraud. In addition, it has expanded to several cities the Medicaid Fraud Strike Force that authorizes FBI and Drug Enforcement Agency agents to jointly analyze Medicare claims data in real time to detect and investigate irregularities by area doctors.

More chillingly, however, the administration is defining Medicare fraud down to include “unnecessary” and “ineffective” care. And to root this out, it plans to make expanded use of private mercenaries—officially called Recovery Audit Contracts—who will be authorized to go to doctors’ offices and rummage through patients’ records, matching them with billing claims to uncover illicit charges. What’s more, Obamacare increases the fine for billing errors from $11,000 per item to $50,000 without the government even having to prove intent to defraud.

There is nothing left but the coercive apparatus of the state to keep patients and doctors in line.

ObamaCare is pushing America down the road to serfdom, but neither its opponents nor advocates seem to have noticed. It is time for civil libertarians in both parties to wake up and strangle it before it strangles what’s left of American freedoms.

I had been looking for something to post about regarding the new Congress. It may seem small, and not a big deal. But it really is a big deal. Why would one party think they could install delegates to vote on amendments? Why just the amendments? On what basis? The Constitution is not about making people feel good. While those who mocked the Republicans for reading the Constitution thought it ridiculous, now we know why. I think this sums up the new House perfectly.

One of the first acts of the new Republican-controlled House is to take away the floor voting rights of six delegates representing areas such as the District of Columbia, Puerto Rico, Guam and American Samoa.

Democrats extended those voting rights in 1993 when they controlled the House. Republicans disenfranchised the delegates when they became the majority in 1995, and Democrats restored delegate rights when they regained control in 2007.