So What Happend Last Month in UPS Plane Crash in Dubai?

Heads up folks. Not looking good on this one. While the drone attacks go on, and I am not against it totally, we are missing out on important intelligence. The snake must be cut off from the head. This will not end well if we do not finish off those who inspire others to carry out their madness. 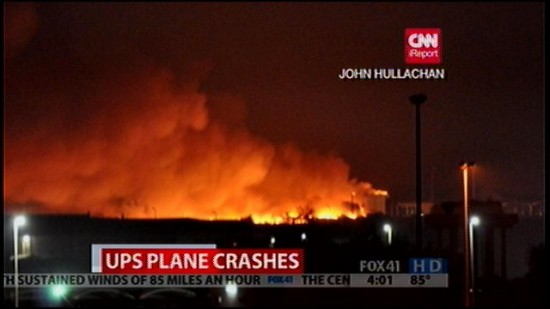 A worldwide terror alert prompted by the discovery of suspect packages on cargo planes may heighten concern over the crash of a UPS 747-400 plane in Dubai last month.

U.S. aviation authorities together with Dubai officials are already investigating the crash of a UPS Flight 6 from Dubai to Cologne in Germany which caught fire shortly after taking off from Dubai International Airport on September 3. The plane crashed soon after on Emirates Road, a major Dubai highway, killing the cargo plane’s two crew members.

The Federal Aviation Administration says the crash is still under investigation and the cause has not been determined.

The authority did say however lithium batteries may have played a role in the crash. Malaysian Sun/