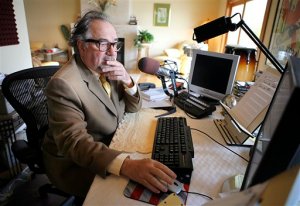 Radio Talk Show host Michael Savage. I have long wondered what the deal is with the British ban on his travel. I happen to like to cue him up on streaming radio while I do my “spinning” excercise at night. Just enough to rile me up to keep the legs moving. His rather strange sardonic humor and morose slant on life resonates with me, and so it goes. Of course he is out there.

He has been particularly vexed that he cannot get any traction in promoting his new book. Why so is amazing in that he claims that Fox has banned him as well. His publisher, Morrow, is in the Murdock family enterprise including News Corp which of course owns Fox.

“Trickle Up Poverty : Stopping Obama’s Attack on Our Borders, Economy, and Security” title does not sound  out of keeping with many of the authors Fox promotes. The puzzle continues. When I caught that the Brits were embracing 1010 Global, of which I assume most have seen the vid by now of blowing up kids, the  mystery only deepens, Update: I caught Savage tonite. He claims and has written, that Murdock is a member of the Bilderberg group, and attended the June meeting  this year. Hmmm. A bit of peak on Murdocks part?

Here tis: Last year 16 people were named, shamed and banned from entering the UK. One of them was Michael Savage, a radio talk show host that spoke out against radical Islam and acts of Muslim terror. He was soon punished by Britain’s Home Secretary, Ms. Jacqui Smith who said she made his name public ‘so others could better understand what sort of behavior Britain was not prepared to tolerate.’

It’s been nearly five days since 1010global.org released its ‘no pressure’ genocide ad campaign in Britain.   Despite 1010’s widely-distributed commercial that advocates human slaughter — teachers using explosives to blow up children — not a peep from Britain’s Home Secretary.

“I think it’s important that people understand the sorts of values and sorts of standards that we have here, the fact that it’s a privilege to come and the sort of things that mean you won’t be welcome in this country. Therefore, I will not hesitate to name and shame those who foster extremist views as I want them to know that they are not welcome here.”

“[Michael Savage] is someone who has fallen into the category of fomenting hatred, of such extreme views and expressing them in such a way that it is actually likely to cause inter-community tension or even violence if that person were allowed into the country.”

The following month, for a hoopla titled “Cuba 50,” Britain rolled out the red carpet for Che Guevara’s daughter, Aleida. The celebration was billed as “the biggest European celebration in this 50th anniversary year (of Castro’s Stalinist regime