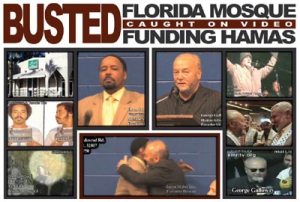 Wherever you can find a buck, Charlie, wherever… so, I say again, how is Anita Dunn’s help working out for you? She must have lots of friends who will pony up— only the best.And Israel is meeting with Zero to broker a peace deal? Sure, you bet. The goal for these fine Islama  folks is to infiltrate our government.

A key Muslim ally of Florida Governor and US Senate candidate Charlie Crist, Imam Muhammad Musri, hosted a fundraiser in Orlando for the terrorist group Hamas in June 2009, and a camera crew from ACT for America infiltrated the event held at Masjid Al-Rahman, Musri’s mosque, to record the proceedings. Imam Musri, head of the Islamic Society of Central Florida, serves on Crist’s Faith-Based and Community Advisory Council and was appointed by Crist to his 2010 Sunshine Census Committee.

That Galloway and Viva Palestina have provided material support for Hamas through the funds they have raised across the U.S. and elsewhere is hardly a secret. In March 2009, Galloway was videotaped by Al-Jazeera giving a duffel bag full of cash to Hamas social minister Ahmad Kurd, who called Galloway “a hero.” Kurd was designated a global terrorist by the U.S. government in August 2007.

In presenting Kurd with the cash, Galloway flaunted his violations of US and UK sanctions:

We are giving you now 100 vehicles and all of the contents, and we make no apology for what I am about to say: We are giving them to the elected government of Palestine. Just in case the British government or the European Union want to face me in any court, let me tell them live on television: I personally am about to break the sanctions on the elected government of Palestine… But I, now, here, on behalf of myself, my sister Yvonne Ridley, and the two Respect councilors – Muhammad Ishtiaq and Naim Khan – are giving three cars and 25,000 pounds in cash to Prime Minister Ismail Haniya. Here is the money. This is not charity. This is politics.

As a result of Galloway’s open funding of the terrorist group, he was banned from entering Canada later that month. So Galloway turned to his Florida friend Muhammad Musri to help take up the fundraising slack.