Is Bloomberg Supporting The Mosque Because Of Financial Interests?

Interesting information on Bloomberg. Is there no one who has the United States of America’s interests first and formost? Are we being sold for 30 pieces of Silver? Why is he so admamant about the mosque?

“But is that the real reason he’s going all-out in supporting this issue? As Robert Spencer points out, from Jihad Watch,  Bloomberg has a strong interest in maintaining viable Middle East relations because his media empire has major holdings in the region:

…in the spring of 2009, Bloomberg opened a news bureau in Abu Dhabi, joining its existing offices not only in Dubai, but in Bahrain, Kuwait, Qatar, and Saudi Arabia. And Bloomberg Chairman and Managing Director Peter T. Grauer announced plans to expand Dubai operations still more: “Central to our growth strategy is the doubling of staff strength in Dubai office, our 10th regional hub, from 48 to 100 people within a year…. We will be investing not just in more people but also in infrastructure to support clients in the region.”

Grauer revealed that while Bloomberg was taking a bath worldwide, business was booming in the Middle East: “Despite the difficulties faced by the financial sector in the economic turmoil, our terminal sales in the region grew by 2% in the past nine months, when globally we faced a major setback.” Khaleej Times reported that “the New York-based company has drawn up a five-year plan that will see it achieving a two-fold increase in revenue from the Middle East region by 2014.”

Imagine how quickly that revenue stream would dry up if Bloomberg sided with the people whom Rauf and other leaders of the Ground Zero mosque initiative are busy smearing as “Islamophobes” and “bigots.” When his company is doing poorly worldwide except in the Middle East, it couldn’t have been hard for Bloomberg to see on which side his bread was buttered.

It’s hard to say what stance Bloomberg would take even if he wasn’t feeling the heat from the burning Middle East desert sun, but it’s worth noting that his interests aren’t only centered around the American people.

Great idea, Anita. Zero has sent out David Axelrod to help out Harry Reid dish some dirt on Angle, and Maoist lover Anita Dunn trying to rescue Crist. How it working out, Charlie? Looking a little desperate?

The evening event will be held at Bell’s Boca Raton home on Oct. 7, less than a month before Crist faces Republican Marco Rubio and Democratic Rep. Kendrick Meek in one of the most closely watched Senate races in the country.The invitation requests $500 per person to attend the general reception and $2,400 per couple for a VIP photo opportunity.
Read more: More at Politico

News that Democratic pollster and former Hillary Clinton advisor Mark Penn was hosting a Crist fundraiser in his Washington home in early August. The party supported the narrative that Dems were jumping ship for Crist, but it also provoked a backlash among loyalists. “Mark Penn screwed up Hillary Clinton’s campaign and now he’s screwing the party that made him a multimillionaire,” one Democrat, who wishes to remain anonymous because of the sensitivity of the situation, says.

On top of that, some Democrats in Washington made moves that implied the White House was silently standing behind Crist. And SKDKnickerbocker, a leading polling and communications firm headed by a number of prominent Democratic operatives like Anita Dunn, Obama’s former communications director, gave new life to the whisper campaign when it agreed to take on Crist as a client. 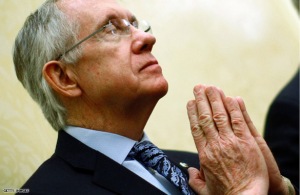 Sharon Angle to the rescue. It’s not a sure bet we can take back the Senate, though the House is looking good. Looks like it may be coming down to Angle to take out this idiot. Last poll I looked at, its neck and neck. I should think this will help in putting a stake in the heart of Reid’s career.

Reid said Tuesday he is courting Republican votes and will continue working on the bill until Congress breaks for the elections.The Democratic leader says a vote could be delayed until after the election, when Republicans might be more receptive. Keep dreaming Harry, after November, the message will be clear.

Reid told reporters during a conference call that at least two GOP senators are considering backing the bill if it includes a renewable energy standard. He didn’t name them.