What does it matter how we answer the Census ? The fix is in. Oh, I am on to you oh wise one!! Me thinks you do protest too much. Let me see, within two weeks of the installation of the Most Wise, you took the census away from the Dept of Commerce and insisted the endeavor was to report directly to the White House. Now why would some Chicago scumbag be so interested so soon??? Ah,so… and now you have the “whatever” to tell us there may be some “inaccuracies”?? Give me a break. I am slow… but not THAT slow.(Chuckles) http://hotair.com/archives/2010/04/01/are-conservatives-blowing-the-census/

Information Technology (IT) problems at the U.S. Census Bureau could cause inaccuracies in this year’s constitutionally mandated decennial tabulation of the U.S. population, according to government auditors. http://www.cnsnews.com/news/article/63380 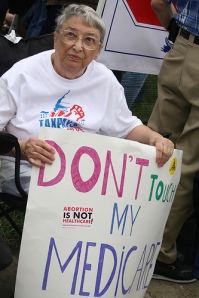 Let me see if I have this straight? With a stroke of a pen, what congress is required to do, CMS simply “waives” it off? Because they “think” Congress will make the Doctor fix? The congress is such a pain in the butt? Centers for Medicare and Medicaid Services have temporarily suspended the cuts in anticipation of the Fix. Hotair has a great update.

The Ticking Time Bomb That Could Scuttle Health Care Reform

The congressional debate over reforming the nation’s health care system is now complete. Yet, the challenge of quality care for our citizens is far from resolved.

On Thursday, unless Congress acts, physicians and their colleagues across the nation will face an across-the-board cut of 21.2 percent to Medicare reimbursements, with more cuts expected to follow in the coming years. Given the current precarious state of the health care delivery system, a jolt of that magnitude would send it into shock. It’s been documented in Maryland and across the country that a 21 percent cut in Medicare reimbursement would create huge shortages in physician access. The irony? All this pain and suffering can be avoided by eliminating the flawed formula that was supposed to create efficiencies.

Implementing the SGR would be ruinous to our health care delivery system. Medicare payments currently cover more than 51 percent of physicians’ direct practice costs. Yet Medicare payments today are only 1 percent higher than they were in 2001. During that same period, the costs for a physician to run a practice have increased 22 percent as measured by the Medicare Economics Index.

For the past 13 years, the sustainable growth rate formula, or SGR, has hung over Medicare like Damocles’ sword. While well-intentioned when it was included in the Medicare reimbursement formula in 1997, it has never been implemented. Congress has passed legislation every year since 1997 to avert the cuts that the sustainable growth rate formula requires. The reason is simple: Congress understands that cuts in compensation for care would reduce access to care and put more patients in harm’s way. http://www.baltimoresun.com/news/opinion/oped/bal-op.medchi30mar30,0,7557568.story

‘Stupak 11′ Request $3.4 Billion in Earmarks the Day After Their Pro-Abortion Obamacare Vote

They have no shame. Sweep clean this November,sweep clean.

The 11 so-called pro-life democrats requested more than $3.4 billion in earmarks the day after they voted for Pelosi’s pro-abortion Obamacare bill.
The Sulight Foundation reported:

A day after Rep. Bart Stupak, D-Mich., and ten other House members compromised on their pro-life position to deliver the necessary yes-votes to pass health care reform, the “Stupak 11″ released their fiscal year 2011 earmark requests, which total more than $3.4 billion–an average of $314 million worth of earmark requests for each lawmaker. *

The eleven members were the focus of high level pressure by House Speaker Nancy Pelosi and other top Democrats because they threatened to vote against the health care reform bill, which passed the House on Sunday, March 21, by a seven vote margin. Granting earmark requests are one of the ways leadership can encourage members to vote their way.

Stupak requested more than $578 million in earmarks, including $125 million for a replacement lock on the Sault Ste. Marie, $25.6 million to build a federal courthouse in Marquette, Mich., $15 million to repaint the Mackinac Bridge and $800,000 to preserve the Quincy Mining Company smelter near Hancock in Michigan’s Upper Peninsula.http://gatewaypundit.firstthings.com/2010/03/stupak-11-request-3-4-billion-in-earmarks-the-day-after-their-pro-abortion-obamacare-vote/ It’s going to take more than this to save their sorry jobs come Novemeber.

Barack Hussein Obama and Indonesia: there’s no place like home

Here is a chilling and must read piece from the “Daily Mail” out of the UK. Oh, I wanted to believe he was just an inept misguided ideologue. It was easier.The alternative was too freightening. In my heart of hearts, I knew it was as it is described in the following:

Now that President Obama has done enough back-room deals to get the Democrats’ health care legislation through the House of Representatives, he can resume making plans for a visit to his childhood home, Indonesia.

One of the reasons a lot of Americans find Obama oddly foreign is that he had an oddly foreign childhood: his formative years were spent in Indonesia. His half-sister, Maya Soetoro Ng, was born there. The rest of Obama’s childhood was spent in Honolulu, a Pacific Ocean capital soaked in East Asian culture.

What’s this got to do with Britain, or indeed with Europe? Plenty. Obama is the first US president who was raised without cultural or emotional or intellectual ties to either Britain or Europe. The British and the Europeans have been so enchanted with  ‘America’s first black president’ that they haven’t been able to see what he really is: America’s first Third World president.

If you doubt it, remember the kick in the teeth he gave Britain over the Falklands just a few weeks ago. Obama had his Secretary of State, Hillary Clinton, fly to Buenos Aires to give American support to President Kirchner’s call for international negotiations over the Falklands. Amazing. What was more amazing is that all we’ve heard out of Number 10 and the Foreign Office since then is that it doesn’t mean anything.

Oh, yes it does, and Washington insiders know it does.

I’ve just been in touch with Dr James Lucier, a former US Senate Foreign Relations Committee Staff Director, about all this. He tells me: ‘Culturally, Obama detests Great Britain. He sent the bust of Churchill back without a fig leaf of an excuse. He insulted the Queen and the Prime Minister, giving them ridiculous gifts.’ At one point, ‘he refused to meet the prime minister.’

Here is what is happening, though the British Government seems oblivious of it. The Obama administration is ready to dump the Old World in pursuit of the One World.

Britain is being dumped. The special relationship, whatever is left of it, is over. Britain losing control of the Falklands to Argentina would just be collateral damage.

But France is being dumped, too. Obama’s ostentatious refusal to have dinner with President Sarkozy during his visit to France last year was no accident. Rather than meet the French president, Obama went off to a restaurant with his wife Michelle.

Germany is being dumped. Obama has been little more than dismissive of Chancellor Merkel. Russia in turn will be waved aside.

Most spectacularly of all, the European Union has now been comprehensively dumped. The American president has refused to attend what is supposed to be a US-EU Madrid summit in May.

What we have shaping up, but what the British Government doesn’t yet grasp, is that Obama has a conscious policy of down-grading America’s relationship with, first, Britain and then with the rest of Europe.

He believes that the US — yes, his own country — and Britain, and the leading European countries, too, for that matter, are imperial powers who ruthlessly exploited the Third World for their own profit.

Forget Obama’s Chicago black cadence. It is a fake. He copied from the kind of black preachers that were unknown to him until he was a grown man and inventing his political image.

What the Obama administration has near-wiped from the president’s personal history is that his only childhood links with America were as a schoolboy in a fashionable private school in Asia-dominated Hawaii, where he was raised by his white, bank executive grandmother.

Chicago is not Obama’s homeland. It never was his formative influence. The president’s world view is more aligned with that of Indonesia.

You can be sure the gift Obama gives the President of Indonesia will be something more than the dvd box-set of old Hollywood movies he gave to Gordon Brown. The US president’s manner on the trip to Indonesia will be more the manner he showed to the King of Saudi Arabia last year. The king received a deep bow, something never done by any US president before. Obama also kow-towed to the Emperor of Japan and to the Chinese premier.

What’s going on? According to Dr Lucier, Obama’s policy is to disestablish the United States, Great Britain and Europe from the hegemony of world power, and elevate in their place the hegemony of the Third World under international governance.

Remember, Obama is a deracinated individual. He has no roots. He is a man from an Asian-Pacific background bred to no admiration for the ancient constitutional history which, until now, has reached across the Atlantic to bind America and Britain.

The president actually feels that the US Constitution, which grew out of Magna Carta and the 1689 Bill of Rights, is ‘inadequate.’

Indeed, Obama has stated that, because the US Constitution guarantees only ‘negative rights’ — that is, establishes what the US Government may not do to individuals or to the sovereign states — instead of giving people guarantees of food, shelter education and health care and the rest, it is ‘inadequate.’

Obama has made it clear he despises both the US Constitution and the British tradition from which it springs.

His decision to send his Secretary of State, Hillary Clinton, to Argentina to give support to President Kirchner is part of this anti-British attitude. Mrs Clinton has supported President Kirchner’s demands that the fate of the Falklands be decided by the United Nations decolonisation committee.

It is all part of the same Obama world-view. This interference in South American affairs is not part of the old yankee — yanqui — imperialism. The important thing to note is that the Obama administration is not stepping in to decide the fate of the Falklands itself.

No, it wants to turn the dispute over to a Third World-dominated instrument of international governance, the UN.

One might imagine that Obama is willing to back Argentina over the Falklands because he thinks America has something to gain from it. That is not the reason. There is no profit for the US in cultivating the Latino presidents, and there is no particular policy to do so.

Rather, US support for Kirchner’s demand that the Falklands question be turned over to the UN is just another opportunity for Obama to strengthen the ideological world system which he hopes will one day overwhelm the old Anglo-Saxon Common Law America.

His vision is for the US to abandon its Constitution and its laws, which are tied to Britain, the country for which he has shown such disdain.