So much for his new best friemds Maybe the rest of the world is as sick of POTUS as we are.

JAKARTA, Indonesia – Scores of Islamic students staged protests outside Jakarta’s parliament and in at least three other major Indonesian cities on Friday against President Barack Obama’s upcoming visit to this predominantly Muslim country.

The students carried banners branding Obama as an enemy of Islam and an imperialist in downtown Jakarta as well as in the provincial capitals Padang, Yogyakarta and Surabaya.

They also threw shoes at large pictures of Obama’s head. An Iraqi journalist was sentenced to a year in prison for throwing his shoes at U.S. President George W. Bush during a news conference in Baghdad in 2008.

Protest organizer Ahmad Irhamul Fikri, spokesman for the Coordinating Board for Campus Proselytizing Institute, said bigger rallies will be staged next Friday in more Indonesian cities ahead of Obama’s March 20-22 visit.

Local government officials allowed business people to erect a statue of a 10-year-old Obama in a Jakarta park in December. But it was shifted last month to a nearby elementary school that he attended after more than 50,000 people supported a Facebook campaign against it and court action was threatened. 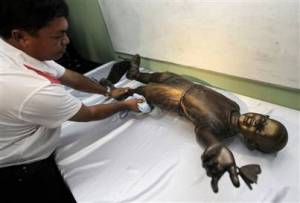 Obama is expected to sign the statue’s pedestal while in Jakarta. Yes, you do that.

Just How Angry Are We?

March 5, 2010 — bunkerville
It became clear when Obama appointed Andy Stern to his deficit reduction team, he had no shame, nor did he care a wit about what the American people thought. It was the proverbial, “I’ll stick it to you” if I like. Well, we are going to stick it to you this  November!
A great post out on “The Anchoress”  and Dan Riehl’s piece on the anger building in America- slide on down to her full post for a good read on the mood of the country:

As Press Secretary Robert Gibbs (who increasingly reminds me of someone who once got a laugh at another’s expense and thus considers himself a wit) declared today, “whatever it takes to get health care done,”, President Obama put the exclamation point to the sentiment by handing some judge robes to the brother of an undecided Democrat. If the timing of the appointment is merely co-incidental, you’d think the president would be attuned to the bad optics of it, but Obama doesn’t really care what anything thinks about what he does.

All of that has left Dan Riehl very, very angry. I mean, way beyond Marvin-the-Martian angry:

This neophyte, this joke we have in the White House has absolutely no idea of the force and the rage he is about to unleash on him and his entire political party. If there are not enough responsible adults left within his party to rein in this accidental, affirmative action jerk, this self-styled, extremely flawed little man, then his party is worthless to America. It deserves to be marginalized electorally and, ultimately, utterly destroyed, before being relegated to the dung heap of history with the rest of the marxist, socialist clowns Americans have dispatched before.

Reconciliation for this disaster of a destructive health care bill I doubt anyone on the Hill can fully define means all out war. The only question remaining is, whose side are you on?

Good Lesson here,why we must stay on top of things. what was almost: Update:SheWithdraws

Its going to be the second time around for Dawn Elizabeth Johnsen’s nomination to head up the  Office of Legal Counsel. It passed out of the Committee along party lines. Her views on Abortion and Countertorrism are alarming. Another great pick from the Department of Justice, and Eric Holder.

“legal abortion remains safer than childhood” Grassley quotes her “And that bans on abortion might undermine the 13th Amendment, which bans slavery. And that,  ‘forced pregnancy requires a woman to provide continual physical service to the fetus in order to further the state’s asserted interest,’ end of quote.” Gee Whiz…

“As head of the Office of Legal Counsel, Johnsen would be the senior official responsible for making legal judgments in the war on terror,” Sen. Jeff Sessions (R-Ala.) said. “But her alarming record should disqualify her from this crucial role.

“Her sweeping condemnations of counterterrorism policies have been factually and legally wrong — and clearly tinted through the lens of her leftist agenda,” Sessions added.

The Office of Legal Counsel provides authoritative legal advice to the president and all the Executive Branch agencies, reviewing all executive orders and proclamations to be issued by the president, the Justice Department Web site says. The office also provides legal advice to the Executive Branch on all constitutional questions and reviews the constitutionality of pending legislation.